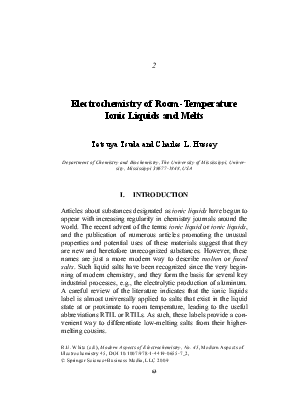 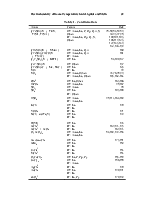 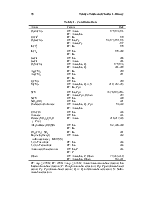 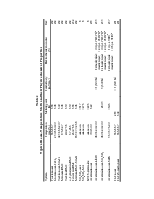 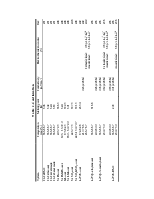 Department of Chemistry and Biochemistry, The University of Mississippi, University, Mississippi 38677-1848, USA

Articles about substances designated as ionic liquids have begun to appear with increasing regularity in chemistry journals around the world. The recent advent of the terms ionic liquid or ionic liquids, and the publication of numerous articles promoting the unusual properties and potential uses of these materials suggest that they are new and heretofore unrecognized substances. However, these names are just a more modern way to describe molten or fused salts. Such liquid salts have been recognized since the very beginning of modern chemistry, and they form the basis for several key industrial processes, e.g., the electrolytic production of aluminum. A careful review of the literature indicates that the ionic liquids label is almost universally applied to salts that exist in the liquid state at or proximate to room temperature, leading to the useful abbreviations RTIL or RTILs. As such, these labels provide a convenient way to differentiate low-melting salts from their highermelting cousins.

Figure 1 illustrates the explosive growth in scientific articles about ionic liquids during the past decade compared to publications containing the descriptors molten or fused salts. These data were collected by using SciFinder. Figure 2 depicts the number of patents issued for all aspects of ionic liquids and for molten or fused salts. Although interest in the technological applications of latter materials is stronger than ever before, the increase in the number of patents devoted to ionic liquids parallels the explosive growth in the number of scientific articles on this subject. There are many factors behind the intense interest in low-melting ionic liquids. Some of these factors include high electrical conductivities that reach to nearly 100 mS cm-1; large liquidus ranges, commonly 173 ~ 450 K; wide electrochemical windows extending to ~5.8 V in some cases; negligible vapor pressure at room temperature; and easily tunable physical and chemical properties.

Recently, research groups in the UK,1 US,2,3 and Japan4 have attempted to present definitions for what exactly defines or constitutes an ionic liquid. We have restated some of the more universal-

Figure 2. Number of patents as a function of year estimated from on-line searches using SciFinder.  The keywords were the same as those used to prepare Fig. 1.

ly accepted simple characteristics of these materials as an aid to the readers of this Chapter:

a)  Ionic liquids are composed entirely of cations and anions.

c)  Although the ionic liquid label properly applies equally well to a molten or fused salt, currently it is by agreement assigned only to salts that are liquid at or below 373 K.

d)  Low-melting mixtures with melting points ≤ 300 K, such as choline chloride-urea or those based on zwitter ions or acetamide, are not ionic liquids in the truest sense because they do not adhere to rules a) and b). However, they can be included with ionic liquids under the broad label roomtemperature melts.

There are numerous short reviews or focused articles about the general properties of ionic liquids,3,5-18 as well as applications involving analytical chemistry,19-23 batteries,24,25 catalysis,26-35 electrochemistry,36-38 inorganic materials,39-41 organic synthesis,42-45 supercritical fluid extraction,46 and even the use of ionic liquids for the preparation of cellulose materials.47 In addition to these reviews, there are numerous monographs devoted to ionic liquids48-59 and proceedings volumes derived from meetings dedicated to ionic liquids, especially the biennial international meetings sponsored by The Electrochemical Society, Inc.60 The preponderance of early research on ionic liquids was focused on haloaluminates, especially room-temperature chloroaluminate ionic liquids, and several