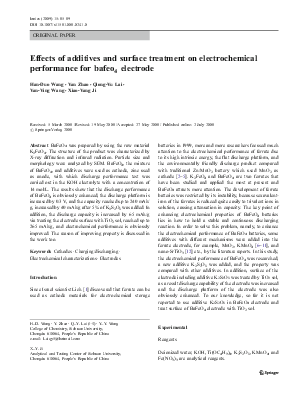 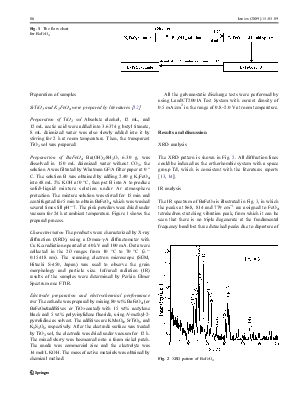 Abstract BaFeO4 was prepared by using the raw material K2FeO4. The structure of the product was characterized by X-ray diffraction and infrared radiation. Particle size and morphology were analyzed by SEM. BaFeO4, the mixture of BaFeO4, and additives were used as cathode, zinc used as anode, with which discharge performance test was carried out in the KOH electrolyte with a concentration of 14 mol/L. The results show that the discharge performance of BaFeO4 is obviously enhanced, the discharge platform is increased by 0.3 V, and the capacity reached up to 240 mAh/ g, increased by 40 mAh/g after 5% of K2S2O8 was added. In addition, the discharge capacity is increased by 65 mAh/g via treating the electrode surface with TiO2 sol, reached up to 265 mAh/g, and electrochemical performance is obviously improved. The reason of improving property is discussed in the work too.

batteries in 1999, more and more researchers focused much attention to the electrochemical performance of ferrate due to its high intrinsic energy, the flat discharge platform, and the environmentally friendly discharge product compared with traditional Zn/MnO2 battery which used MnO2 as cathode [2–5]. K2FeO4 and BaFeO4 are two ferrates that have been studied and applied the most at present and BaFeO4 attracts more attention. The development of ferrate batteries was restricted by its instability, because sexavalentiron of the ferrates is reduced quite easily to trivalent ions in solution, causing attenuation in capacity. The key point of enhancing electrochemical properties of BaFeO4 batteries lies in how to hold a stable and continuous discharging reaction. In order to solve this problem, namely, to enhance the electrochemical performance of BaFeO4 batteries, some additives with different mechanisms were added into the ferrate electrode, for example, MnO2, KMnO4 [6–11], and nano-SrTiO3 [12] etc., by the literature reports. In this study, the electrochemical performance of BaFeO4 was researched, a new additive K2S2O8 was added, and the property was compared with other additives. In addition, surface of the electrode including additive K2S2O8 was treated by TiO2 sol, as a result discharge capability of the electrode was increased and the discharge platform of the electrode was also obviously enhanced. To our knowledge, so far it is not reported to use additive K2S2O8 in BaFeO4 electrode and treat surface of BaFeO4 electrode with TiO2 sol.

SrTiO3 and K2FeO4 were prepared by literatures [12]

Preparation of TiO2 sol Absolute alcohol, 12 mL, and 12 mL acetic acid were added into 3.6374 g butyl titanate, 8 mL deionized water was also slowly added into it by stirring for 2 h at room temperature. Then, the transparent TiO2 sol was prepared.

Preparation of BaFeO4 Ba(OH)2·8H2O, 6.30 g, was dissolved in 150 mL deionized water without CO2, the solution A was filtrated by Whatman GF/A filter paper at 0 ° C. The solution B was obtained by adding 2.40 g K2FeO4 into 48 mL 2% KOH at 0 °C, then put B into A to produce solid–liquid mixture solution under Ar atmosphere protection. The mixture solution was stirred for 15 min and centrifugated for 5 min to obtain BaFeO4, which was washed several times till pH=7. The pink powders were dried under vacuum for 24 h at ambient temperature. Figure 1 shows the prepared process.