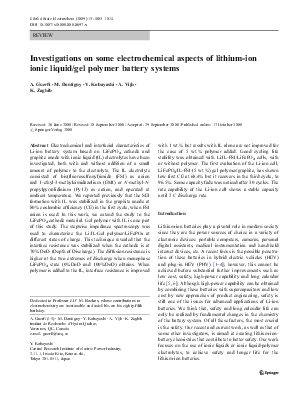 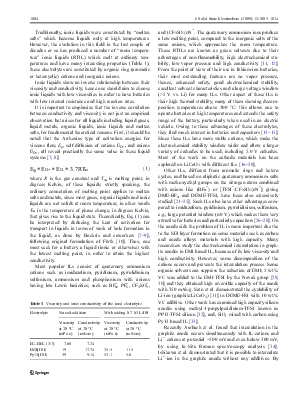 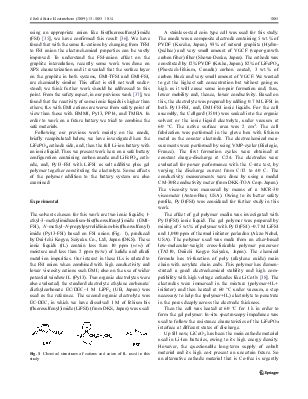 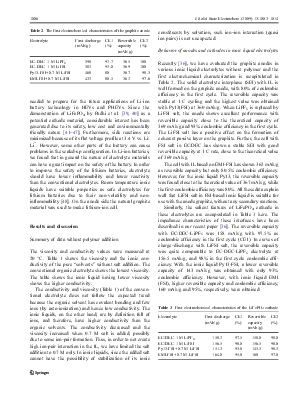 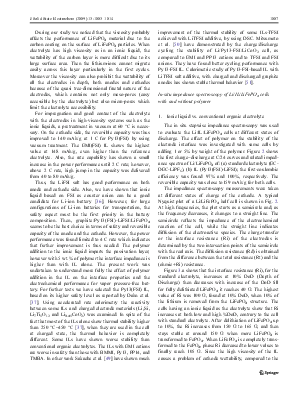 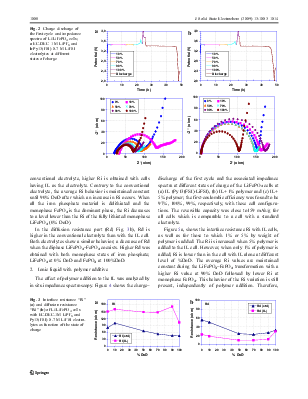 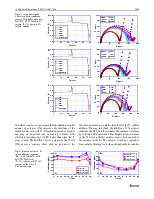 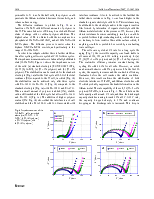 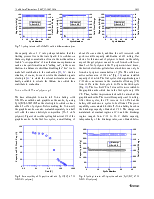 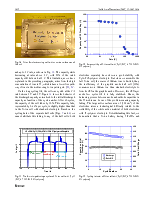 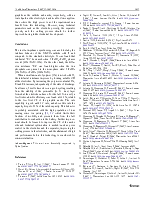 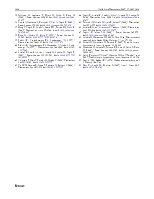 Abstract Electrochemical and interfacial characteristics of Li-ion battery system based on LiFePO4 cathode and graphite anode with ionic liquid (IL) electrolytes have been investigated, both with and without addition of a small amount of polymer to the electrolyte. The IL electrolyte consisted of bis(fluorosulfonyl)imide (FSI) as anion and 1-ethyl-3-methyleimidazolium (EMI) or N-methyl-Npropylpyrrolidinium (Py13) as cation, and operated at ambient temperature. We reported previously that the SEI formation with IL was stabilized in the graphite anode at 80% coulombic efficiency (CE) in the first cycle, when FSI anion is used. In this work, we extend the study to the LiFePO4 cathode material. Gel polymer with IL is one part of this study. The stepwise impedance spectroscopy was used to characterize the Li/IL-Gel polymer/LiFePO4 at different states of charge. This technique revealed that the interface resistance was stabilized when the cathode is at 70% DoD (Depth of Discharge). The diffusion resistance is higher at the two extremes of discharge when monophase LiFePO4 state (0%DoD and 100%DoD) obtains. When polymer is added to the IL, interface resistance is improved

Dedicated to Professor J.O’ M. Bockris, whose contributions to electrochemistry are inestimable and indelible, on his eighty-fifth birthday.

with 1 wt.% but results with IL alone are not improved for the case of 5 wt.% polymer added. Good cycling life stability was obtained with Li/IL-FSI/LiFePO4 cells, with or without polymer. The first evaluation of the Li-ion cell, LiFePO4/IL-FSI-(5 wt.%) gel polymer/graphite, has shown low first CE at 68.4% but it recovers in the third cycle, to 96.5%. Some capacity fade was noticed after 30 cycles. The rate capability of the Li-ion cell shows a stable capacity until 2 C discharge rate.

Lithium-ion batteries play a pivotal role in modern society since they are the power sources of choice in a variety of electronic devices: portable computers, cameras, personal digital assistants, medical instrumentation and hand-held internet devices, etc. A recent focus is the possible penetration of these batteries in hybrid electric vehicles (HEV) and plug-in HEV (PHV) [1–4]; however, this cannot be achieved before substantial further improvements such as low cost, safety, high-power capability and long calendar life [5, 6]. Although high-power capability can be obtained by combining these batteries with supercapacitors and low cost by new approaches of product engineering, safety is still one of the issues for advanced applications of Li-ion batteries. We think that, safety and long calendar life can only be realized by fundamental changes in the chemistry of the battery system. Of all these factors, the most crucial is the safety. Our recent and current work, as well as that of some other investigators, is aimed at creating lithium-ionbattery chemistries that contribute to better safety. Our work focuses on the use of ionic liquids or ionic liquid-polymer electrolytes, to achieve safety and longer life for the lithium-ion batteries.

Traditionally, ionic liquids were constituted by “molten salts” which become liquids only at high temperatures. However, the evolution in this field in the last couple of decades or so has produced a number of “room temperature” ionic liquids (RTIL) which melt at ordinary temperatures and have many interesting properties (Table 1); these electrolytes are constituted by organic ring (aromatic or hetercyclic) cations and inorganic anions.

Ionic liquids show an inverse relationship between their viscosity and conductivity; hence one should aim to choose ionic liquids with low viscosities in order to have batteries with low internal resistance and high reaction rates.

It is important to emphasize that the inverse correlation between conductivity and viscosity is not just an empirical observation but arises for all liquids including liquid gases, liquid metals, organic liquids, ionic liquids and molten salts, for fundamental theoretical reasons. First, it should be noted that the Arrhenius type of activation energies for viscous flow, Eŋ, self-diffusion of cations ED+, and anions ED−, all reveal practically the same value in these liquid systems [7, 8]: