The new Assessment Centre. General Plastics PLc is located in the north-east of England - an area of high unemployment 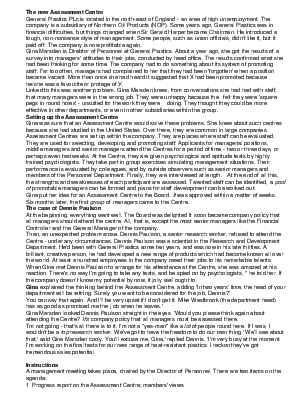 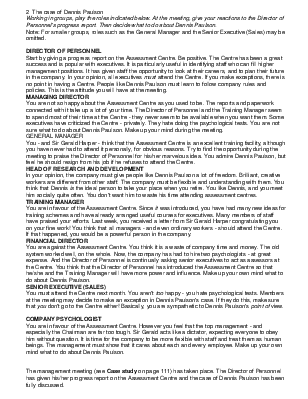 General Plastics PLc is located in the north-east of England - an area of high unemployment. The company is a subsidiary of Northern Oil Products (NOP). Some years ago, General Plastics was in financial difficulties, but things changed when Sir Gerald Harper became Chairman. He introduced a tough, non-nonsense style of management. Some people, such as union officials, didn't like it, but it paid off. The company is now profitable again.

Gina Marsden is Direbtor of Personnel at General Plastics. About a year ago, she got the results of a survey into managers' attitudes to their jobs, conducted by head office. The results confirmed what she had been thinking for some time. The company had to do something about its system of promoting staff. Far too often, managers had complained to her that they had been 'forgotten' when a position became vacant. More than once she had heard it suggested that X had been promoted because he/she was a favourite or protege of У.

Linked to this was another problem. Gina Marsden knew, from conversations she had had with staff, that many managers were in the wrong job. They were unhappy because the   felt they were 'square pegs in round holes' - unsuited for the work they were    doing. They thought they could be more effective in other departments, or even in other subsidiaries within the group.

Setting up the Assessment Centre

Gina was sure that an Assessment Centre would solve these problems. She knew about such centres because she had studied in the United States. Over there, they are common in large companies. Assessment Centres are set up within the company. They are places where staff can be evaluated. They are used for selecting, developing and promoting staff. Applicants for managerial positions, middle managers and senior managers attend the Centres for a period of time - two or three days, or perhaps even two weeks. At the Centre, they are given psychological and aptitude tests by highly trained psychologists. They take part in group exercises simulating management situations. Their performance is evaluated by colleagues, and by outside observers such as senior managers and members of the Personnel Department. Finally, they are interviewed at length.   At the end of all this, the strengths and weaknesses of each participant are assessed. Talented staff can be identified, a pool of promotable managers can be formed and plans for staff development can be worked out.

Gina put her idea for an Assessment Centre to the Board. It was approved within a matter of weeks. Six months later, the first group of managers came to the Centre.

The case of Dennis Paulson

At the beginning, everything went well. The Board was delighted It soon became company policy that all managers should attend the centre. All, that is, except the most senior managers like the Financial Controller and the General Manager of the company.

Then, an unexpected problem arose. Dennis Paulson, a senior research worker, refused to attend the Centre - under any circumstances. Dennis Paulson was a scientist in the Research and Development Department. He'd been with General Plastics some ten years, and was now in his late thirties. A brilliant, creative person, he had developed a new range of products which had become known all over the world. At least a hundred employees in the company owed their jobs to his remarkable talents.

When Gina met Dennis Paulson to arrange for his attendance at the Centre, she was amazed at his reaction. There's no way I'm going to take any tests, and be spied on by psychologists, * he told her. If the company doesn't know my potential by now, it jolly well ought to.

Gina explained the thinking behind the Assessment Centre, adding 'In two years' time, the head of your department will be retiring. Surely you want to be considered for the job, Dennis?'

You can say that again. And I'll be very upset if I don't get it. Mike Westbrook (the department head) has as good as promised me the j ob when he leaves.'

Gina Marsden looked Dennis Paulson straight in the eyes. 'Would you please think again about attending the Centre? It's company policy that all managers must be assessed there.

Tm not going - that's all there is to it. I'm not a "yes-man" like a lot of people round here. If I was, I wouldn't be a top research worker. We've got to have the freedom to do our own thing.' We'll see about that,' said Gina Marsden cooly. You'll excuse me, Gina,' replied Dennis. 'I'm very busy at the moment. I'm working on the final tests for our new range of heat-resistant plastics. I reckon they've got tremendous sales potential.

A management meeting takes place, chaired by the Director of Personnel. There are two items on the agenda:

2  The case of Dennis Paulson

Working in groups, play the roles indicated below. At the meeting, give your reactions to the Director of Personnel's progress report. Then decide what to do about Dennis Paulson.