Supervisory time. The old saying that "time is money" applies with equal force to both the supervisor's own time and to employees' tim 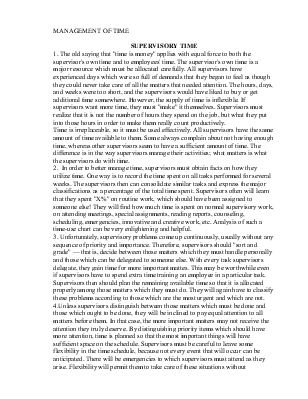 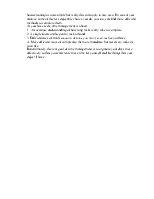 1. The old saying that "time is money" applies with equal force to both the supervisor's own time and to employees' time. The supervisor's own time is a major resource which must be allocated carefully. All supervisors have experienced days which were so full of demands that they began to feel as though they could never take care of all the matters that needed attention. The hours, days, and weeks were too short, and the supervisors would have liked to buy or get additional time somewhere. However, the supply of time is inflexible. If supervisors want more time, they must "make" it themselves. Supervisors must realize that it is not the number of hours they spend on the job, but what they put into those hours in order to make them really count productively.

Time is irreplaceable, so it must be used effectively. All supervisors have the same amount of time available to them. Some always complain about not having enough time, whereas other supervisors seem to have a sufficient amount of time. The difference is in the way supervisors manage their activities; what matters is what the supervisors do with time.

2.  In order to better manage time, supervisors must obtain facts on how they utilize time. One way is to record the time spent on all tasks performed for several weeks. The supervisors then can consolidate similar tasks and express the major classifications as a percentage of the total time spent. Supervisors often will learn that they spent "X%" on routine work, which should have been assigned to someone else! They will find how much time is spent on normal supervisory work, on attending meetings, special assignments, reading reports, counseling, scheduling, emergencies, innovative and creative work, etc. Analysis of such a time-use chart can be very enlightening and helpful.

3. Unfortunately, supervisory problems come up continuously, usually without any sequence of priority and importance. Therefore, supervisors should "sort and grade" — that is, decide between those matters which they must handle personally and those which can be delegated to someone else. With every task supervisors delegate, they gain time for more important mattes. This may be worthwhile even if supervisors have to spend extra time training an employee in a particular task. Supervisors then should plan the remaining available time so that it is allocated properly among those matters which they must do. They will again have to classify these problems according to those which are the most urgent and which are not.

4.Unless supervisors distinguish between those matters which must be done and those which ought to be done, they will be inclined to pay equal attention to all matters before them. In that case, the more important matters may not receive the attention they truly deserve. By distinguishing priority items which should have more attention, time is planned so that the most important things will have sufficient space on the schedule. Supervisors must be careful to leave some flexibility in the time schedule, because not every event that will occur can be anticipated. There will be emergencies to which supervisors must attend as they arise. Flexibility will permit them to take care of these situations without significantly disrupting their personal time schedules. 5.Many techniques have been devised to help supervisors control their time schedules. One of the simplest methods is to use a desk calendar, noting on the calendar those items which need major attention, such as appointments, meetings, reports, and discussions. The supervisor should schedule events as far in advance as practicable; in so doing, they will automatically be noted for attention on the calendar when they are due.

Another effective way of planning each week's work is to keep