Maslow. The work of managers is to ensure that staff work efficiently in an organisation. Herzberg's. Another theory of motivation is Frederick Herzberg's 'two-factor' theory 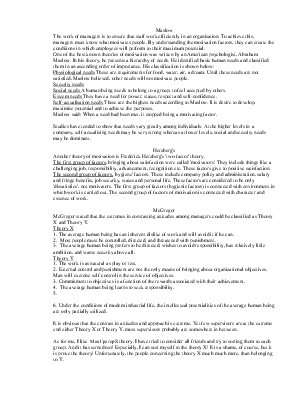 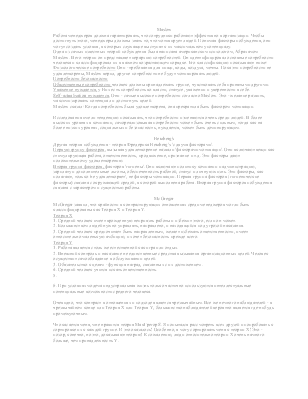 The work of managers is to ensure that staff work efficiently in an organisation. To achieve this, managers must know what motivates people. By understanding the motivation factors, they can create the conditions in which employees will perform to their maximum potential.

One of the best known theories of motivation was written by an American psychologist, Abraham Maslow. In his theory, he presents a hierarchy of needs. He identified basic human needs and classified them in an ascending order of importance. His classification is shown below:

Physiological needs These are requirements for food, water, air, a dream. Until these needs are not satisfied, Maslow believed, other needs will not motivate people.

Social needs A human being needs to belong to a group, to feel accepted by others.

Esteem needs They have a need for power, status, respect and self-confidence.

Self-actualisation needs These are the highest needs according to Maslow. It is desire to develop, maximise potential and to achieve the purposes.

Maslow said: When a need had been met, it stopped being a motivating factor.

Studies have tended to show that needs vary greatly among individuals. At the higher levels in a company, self-actualising needs may be very strong whereas at lower levels, social and security needs may be dominant.

Another theory of motivation is Frederick Herzberg's 'two-factor' theory.

The first group of factors, bringing about satisfaction were called 'motivators'. They include things like a challenging job, responsibility, advancement, recognition etc. These factors give to positive satisfaction.

McGregor stated that the extremes in contrasting attitudes among managers could be classified as Theory X and Theory Y.

1. The average human being has an inherent dislike of work and will avoid it if he can.

2.  Most people must be controlled, directed, and threatened with punishment.

3.  The average human being prefers to be directed, wishes to avoid responsibility, has relatively little ambition, and wants security above all.

1. The work is as natural as play or rest.

2. External control and punishment are not the only means of bringing about organizational objectives. Man will exercise self-control in the service of objectives.

3. Commitment to objectives is a function of the rewards associated with their achievement.

4.  The average human being learns to seek responsibility.

6. Under the conditions of modem industrial life, the intellectual potentialities of the average human being are only partially utilized.

It is obvious that the contrast in attitudes and approach is extreme. Yet few supervisors are at the extreme end either Theory X or Theory Y, most supervisors probably are somewhere in between.

As for me, I like  МакГрегорS theory. I have tried to consider all friends and try to sorting them to each group. And it has turned out! Especially, I can sort myself to the theory X! It is a shame, of course, but it is prove the theory! Unfortunately, the people concerning the theory X much much more, than belonging to Y.