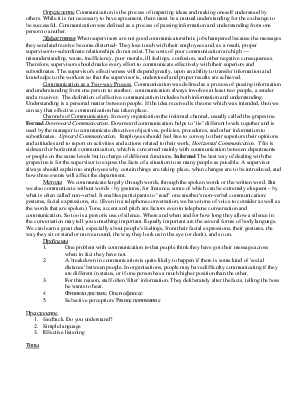 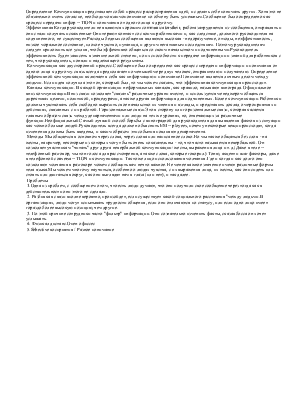 Эффективная When supervisors are not good communicatorstheir, jobs hampered because the messages they send and receive become distorted- They lose touch with their employees and, as a result, proper supervisor-to-subordinate relationships do not exist. The costs of poor communication are high — misunderstanding, waste, inefficiency, poor morale, ill feelings, confusion, and other negative consequences. Therefore, supervisors should make every effort to communicate effectively with their superiors and subordinates. The supervisor's effectiveness will depend greatly, upon an ability to transfer information and knowledge to the workers so that the supervisor is, understood and proper results are achieved.

Channels of Communication. In every organization the informal channel, usually called the grapevine. Formal Downward Communication. Downward communication helps to "tie" different levels together and is used by the manager to communicate directives objectives, policies, procedures, and other information to subordinates.  Upward Communication.  Employees should feel free to convey to their superiors their opinions and attitudes and to report on activities and actions related to their work. Horizontal Communication.  This is sideward or horizontal communication, which is concerned mainly with communication between departments or people on the same levels but in charge of different functions. Informal The best way of dealing with the grapevine is for the supervisor to expose the facts of a situation to as many people as possible. A supervisor always should explain to employees why certain things are taking place, when changes are to be introduced, and how these events will affect the department.

Методы   We communicate largely through words, through the spoken words or the written word. But we also communicate without words - by gestures, for Instance, some of which can be extremely eloquent - by what is often called non-verbal. It enables participants to "read" one another's non-verbal communication: gestures, facial expressions, etc. (Even in a telephone conversation, we have tone of voice to consider as well as the words that are spoken.) Tone, accent and pitch are factors even in telephone conversation and communication. So too is a person's use of silence. Where and when and for how long they allow a silence in the conversation may tell you something important. Equally important are the several forms of body language. We can learn a great deal, especially about people's feelings, from their facial expressions, their gestures, the way they sit or stand or move around, the way they look us in the eye (or don't), and so on.

1.  One problem with communication is-that people think they have got their message across when in fact they have not.

2.  A breakdown in communication is quite likely to happen if there is some kind of 'social distance' between people. In organisations, people may have difficulty communicating if they are different in status, or if one person has a much higher position than the other.

3.  For this reason, staff often 'filter' information. They deliberately alter the facts, telling the boss he wants to hear.