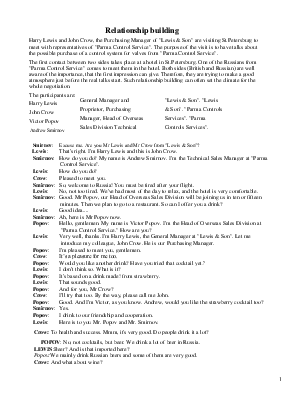 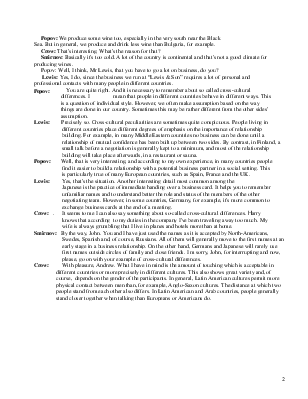 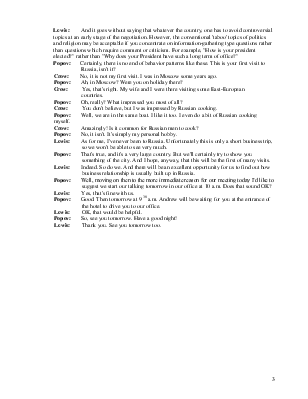 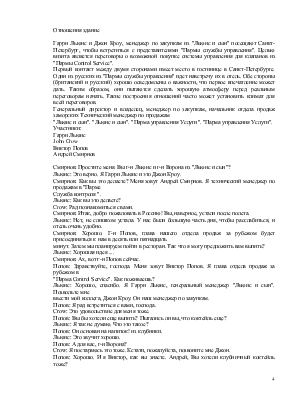 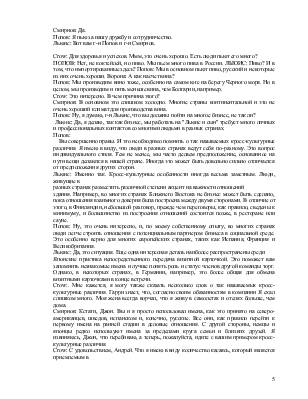 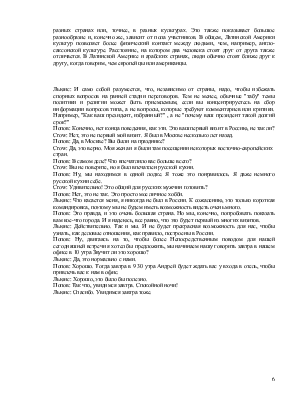 The first contact between two sides takes place at a hotel in St.Petersburg. One of the Russians from "Parma Control Service" comes to meet them in the hotel. Both sides (British and Russian) are well aware of the importance, that the first impression can give. Therefore, they are trying to make a good atmosphere just before the real talks start. Such relationship building can often set the climate for the whole negotiation.

Smirnov:   How do you do? My name is Andrew Smirnov. I'm the Technical Sales Manager at "Parma

Smirnov:   So, welcome to Russia! You must be tired after your flight.

Lewis:      No, not too tired. We've had most of the day to relax, and the hotel is very comfortable.

Smirnov:   Good. Mr Popov, our Head of Overseas Sales Division will be joining us in ten or fifteen

minutes. Then we plan to go to a restaurant. So can I offer you a drink?

Popov:      Hello, gentlemen. My name is Victor Popov. I'm the Head of Overseas Sales Division at

"Parma Control Service." How are you?

introduce my colleague, John Crow. He is our Purchasing Manager.

Popov:      Would you like another drink? Have you tried that cocktail yet?

Popov:      Good. And I'm Victor, as you know. Andrew, would you like the strawberry cocktail too?

Popov:      I drink to our friendship and cooperation.

Crow: To health and success. Mmm, it's very good. Do people drink it a lot?

Popov: We produce some wine too, especially in the very south near the Black Sea. But in general, we produce and drink less wine than Bulgaria, for example.

Crow: That's interesting. What's the reason for that?

Smirnov: Basically it's too cold. A lot of the country is continental and that's not a good climate for producing wines.

Popov: Well, I think, Mr Lewis, that you have to go a lot on business, do you?

Lewis: Yes, I do, since the business we run at “Lewis & Son” requires a lot of personal and professional contacts with many people in different countries.

You are quite right. And it is necessary to remember about so called cross-cultural differences. I                 mean that people in different countries behave in different ways. This is a question of individual style. However, we often make assumption based on the way things are done in our country. Sometimes this may be rather different from the other sides' assumption.

Lewis:        Precisely so. Cross-cultural peculiarities are sometimes quite conspicuous. People living in
different countries place different degrees of emphasis on the importance of relationship
building. For example, in many Middle Eastern countries no business can be done until a relationship of mutual confidence has been built up between two sides. By contrast, in Finland, a small talk before a negotiation is generally kept to a minimum, and most of the relationship building will take place afterwards, in a restaurant or sauna.

Popov:       Well, that is very interesting, and according to my own experience, in many countries people find it easier to build a relationship with a potential business partner in a social setting. This is particularly true of many European countries, such as Spain, France and the UK.

Lewis:        Yes, that's the situation. Another interesting detail most common among the

Japanese is the practice of immediate handing over a business card. It helps you to remember unfamiliar names and to understand better the role and status of the members of the other negotiating team. However, in some countries, Germany, for example, it's more common to exchange business cards at the end of a meeting.

Crow:   .     It seems to me I can also say something about so-called cross-cultural differences. Harry knows that according  to my duties in the company I've been traveling away too much. My wife is always grumbling that I live in planes and hotels more than at home.