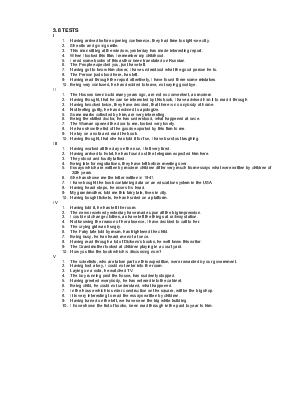 1.  Having arrived before opening conference, they had time to sight-see city.

2.  She sits and giving smile.

3.  This man sitting at the window, yesterday has made interesting report.

4.  When I looked this film, I remember my childhood.

5.  I read some books of this author been translated on Russian.

6.  The People expected you, just have left.

7.  Having got to know him closer, I have understood what the good person he is.

9.  Having read through the report attentively, I have found there some mistakes.

10.  Being very confused, he has decided to leave, not saying goodbye.

1.  The Houses been build many years ago, are not so convenient, as modern.

2.  Having thought, that he can be interested by this book, I have advised him it to read it through.

3.  Having knocked twice, they have decided, that there is no anybody at home.

4.  Not feeling guilty, he has declined to apologize.

5.  Some marks collected by him, are very interesting.

6.  Being the skilled doctor, he has understood, what happened at once.

7.  The Woman opened the door to me, looked very lovely.

8.  He has show the list of the goods exported by this firm to me.

10.  Having thought, that she has told it for fun, I have burst out laughing.

1.  Having worked all the day on the sun, I felt very tired.

2.  Having arrived to hotel, he has found out the telegram expected him here.

3.  They stood and loudly talked.

4.  Being late for negotiations, they have left before meeting over.

7.  I have bought the book containing data on an education system in the USA.

8.  Having heard steps, he raises his head.

9.  My grandmother, told me this fairy tale, lives in city.

10.  Having bought tickets, he has hurried on a platform.

2.  The news received yesterday have made upon all the big impression.

3.  I could not change clothes, as have left the things at railway station.

4.  Not knowing the reason of her absence, I have decided to call to her.

5.  The crying girl was hungry.

6.  The Fairy tale told by mum, has frightened the child.

8.  Having read through a lot of Dickens's books, he well knew this writer.

9.  The Grandmother looked at children playing in a court yard.

10.  How you like the book which is discussing now?

1.  The scientists, who are taken part on this expedition, were rewarded by our government.

2.  Having lost a key, I could not enter into the room.

4.  The boy running past the house, has suddenly stopped.

5.  Having greeted everybody, he has entered into the cabinet.

6.  Being child, he could not understand, what happened.

7.  In the house which is under construction on the square, will be the big shop.

8.  It is very interesting to read the essays written by children.

9.  Having turned on the left, we have seen the big white building.

10.  I have shown the list of books, been read through in the past to year to him.