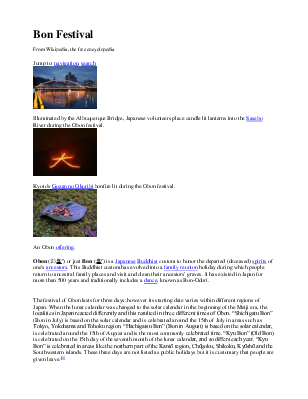 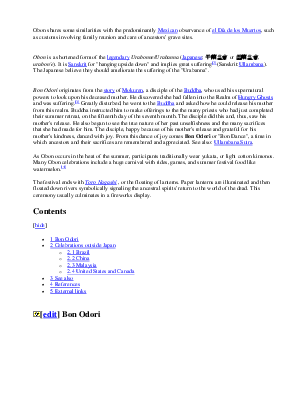 From Wikipedia, the free encyclopedia

Illuminated by the Albuquerque Bridge, Japanese volunteers place candle lit lanterns into the Sasebo River during the Obon festival.

Kyoto's Gozan no Okuribi bonfire lit during the Obon festival.

Obon (お盆, Obon?) or just Bon (盆, Bon?) is a Japanese Buddhist custom to honor the departed (deceased) spirits of one's ancestors. This Buddhist custom has evolved into a family reunion holiday during which people return to ancestral family places and visit and clean their ancestors' graves. It has existed in Japan for more than 500 years and traditionally includes a dance, known as Bon-Odori.

The festival of Obon lasts for three days; however its starting date varies within different regions of Japan. When the lunar calendar was changed to the solar calendar in the beginning of the Meiji era, the localities in Japan reacted differently and this resulted in three different times of Obon. “Shichigatu Bon” (Bon in July) is based on the solar calendar and is celebrated around the 15th of July in areas such as Tokyo, Yokohama and Tohoku region. “Hachigatsu Bon” (Bon in August) is based on the solar calendar, is celebrated around the 15th of August and is the most commonly celebrated time. “Kyu Bon” (Old Bon) is celebrated on the 15th day of the seventh month of the lunar calendar, and so differs each year. “Kyu Bon” is celebrated in areas like the northern part of the Kantō region, Chūgoku, Shikoku, Kyūshū and the Southwestern islands. These three days are not listed as public holidays but it is customary that people are given leave.[1]

Obon is a shortened form of the legendary Urabonne/Urabanna (Japanese: 于蘭盆會 or 盂蘭盆會, urabon'e). It is Sanskrit for "hanging upside down" and implies great