Auckland. The education system of Auckland 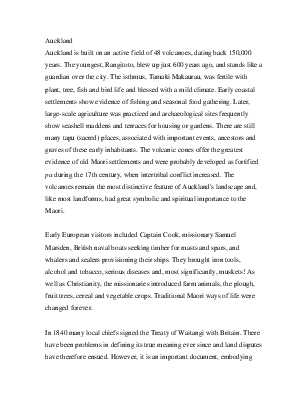 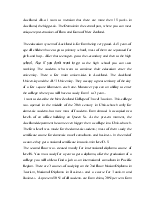 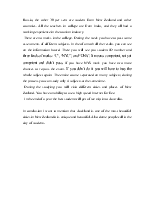 After the hard early pioneering days, people could now discover and enjoy the attractions of the Auckland region. During the early 1900s, the Ferry Building, the Post Office, the Town Hall and the Parnell Baths were all examples of new building thought suitable for a sophisticated and civilized city. Grafton Bridge was built and internationally acclaimed as the first reinforced concrete arch in the Southern Hemisphere. The Maori population, however, was decreasing. It was assumed they would die out! The War Memorial Museum honours the thousands of young New Zealanders killed and wounded in the First World War and other wars. During the Second World War, large coastal gun batteries, such as those along Tamaki Drive, were installed around the city. Auckland's population reached 630,000 by 1970, due to both urban migration and immigration--mostly from Britain and Holland in the 1950s and the Pacific Islands in the 1960s. Motorways were begun in the 50s and the Harbour Bridge opened in 1959, drawing the North Shore into the growing metropolis. Auckland has seen its share of debate and political action, from Flower Power and anti-Vietnam War rallies to Peace Squadron anti-nuclear flotillas on the Waitemata Harbour and enormous protests against the 1981 Springbok Tour. Bastion Point was the focus of a long Ngati Whatua occupation in the 1980s and national attempts to resolve Maori land issues continue today. In 1985 French secret agents sank the Greenpeace boat Rainbow Warrior in the harbour. Auckland's population reached one million in 1996. Waves of new immigrants have recently made Auckland their home and more and more people try to cram onto the narrow isthmus. From the different languages spoken in the street, and the variety of ethnic food now available, you would never guess Auckland to be a small place, right down-under in the South Pacific. Tourism is vital, and an exciting variety of activities and experiences await visitors to this vibrant, multi-cultural city.

It located between 2 waterfronts that are why the western Auckland is washed by Tasman but the Eastern Auckland is washed by the Pacific Ocean. Because of its geographical position the climate in Auckland is not very friendly. More then half of the year the weather in the city is rainy. In common the year is separated on two seasons’ winter and summer. It is another way round then in the northern Hemisphere. The ordinary temperature in winter is +10 +15 degree during the day and +5+7 at night. Winter is one of the most rainy season during the year it is impossible during the week not to have 4-5 days with out rain, moreover it is very windy. In summer the weather is more soft and friendly for people. The normal daily temperature is +20+30. It is hotter then in other places of New Zealand. Summer is not so rainy for 90 days of summer there are near 20 days of rain.

One of the main problems in New Zealand is the hole in ozone level. That’s why the level of skin cancer is one of the hires in the world. You can’t get the sunbath in Auckland without special sun protection.

Auckland is tours destination which attracts a great number of tourists from all over the globe especially from the USA, UK, Australia and the South Pacific Region. Also Auckland is famous for its sights which include Sky Tower, The Auckland Domain Museum where you can see a lot of historical exponents, The Winter Garden, The Maritime ship museum and also the Auckland Zoo where you can mention many rear and unique represents of Flora and fauna such as Kiwi bird, New Zealand parrots and etc.

In common there are two types of tourists who visit Auckland; they are Backpackers and Rich Tourists. Backpackers are the tourists who travel all over the New Zealand just with a big bag and the most important staff for living. Usually they study in Auckland in of the great numbers of English school, living in chip backpackers’ hotels and working either in restaurants or picking fruits.  The second type of tourists prefers only expensive five star hotels