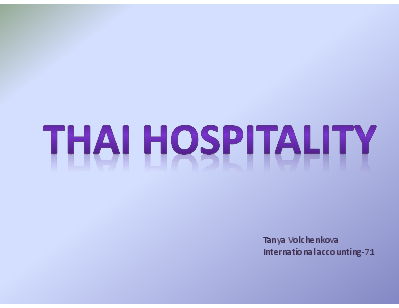 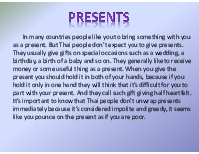 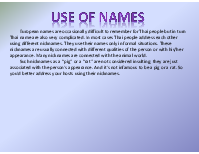 All Thai people like to go to see somebody. In most cases guests are unexpected because in Thailand doors are always open unlike most other countries. In this case the word “open” can be translated both literally and figuratively. Earlier there were strict rules concerning the relations between the host and his guests in Thailand but now they are followed very seldom. But of cause there are some rules that you’d better know not to insult your host.

You should take off your shoes before you enter the house. Thai people like you to leave your shoes at the threshold. The floor in the house is occasionally so clean and dusted that you can even eat from eat. Inside the house Thai people usually wear special slippers or just go barefoot. In Thailand footwear is considered dirty according to ceremonial point of view. Besides footwear is usually made out of leather and leather is a part of a killed animal. So everything that is connected with death is considered unclean.

After you have taken off your shoes and entered the house you are generally offered the most comfortable place. Besides when you enter the house you are usually offered a glass of water because of very hot weather. Thai people are very attentive and compassionate to other people and most of Thai families put a clay vessel filled with clean water in the street for the passers by to quench their thirst. After you have found your sit you are asked different questions. Thai can ask you some personal questions about you family, children and especially about your income. Many European people consider such questions impolite but for Thai people it’s important to know about your financial possibilities.

During the talk the hosts occasionally offer you something to eat or drink. It’s very important for Thai hospitality to give the guest everything that he needs and so the guest doesn’t have to feel any lack of something. So you are always offered a very good nourishing and tasty dinner and for the hosts it doesn’t matter if it costs highly as it has to be very rich and contain many dishes. You know Thai people don’t like people who care of money a lot; they call them “cheapskates”.

In many countries people like you to bring something with you as a present. But Thai people don’t expect you to give presents. They usually give gifts on special occasions such as a wedding, a birthday, a birth of a baby and so on. They generally like to receive money or some useful thing as a present. When you give the present you should hold it in both of your hands, because if you hold it only in one hand they will think that it’s difficult for you to part with your present. And they call such gift giving half heartfelt. It’s important to know that Thai people don’t unwrap presents immediately because it’s considered impolite and greedy, it seems like you pounce on the present as if you are poor.

European names are occasionally difficult to remember for Thai people but in turn Thai name are also very complicated. In most cases Thai people address each other using different nicknames. They use their names only in formal situations. These nicknames are usually connected with different qualities of the person or with his/her appearance. Many nicknames are connected with the animal world. Such nicknames as a “pig” or a “rat” are not considered insulting; they are just associated with the person’s appearance. And it’s not infamous to be a pig or a rat. So you’d better address your hosts using their nicknames.