A problem of skiving utilization. А modern and progressive process for machining of short bodies of revolution 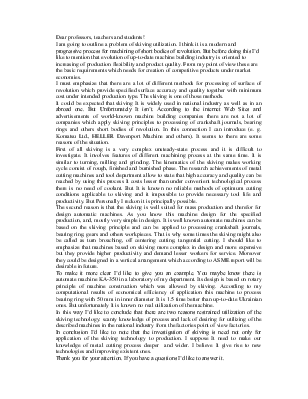 I am going to outline a problem of skiving utilization. I think it is a modern and progressive process for machining of short bodies of revolution. But before doing this I’d like to mention that evolution of up-to-date machine building industry is oriented to increasing of production flexibility and product quality. From my point of view these are the basic requirements which needs for creation of competitive products under market economies.

I must emphasize that there are a lot of different methods for processing of surface of revolution which provide specified surface accuracy and quality together with minimum cost under intended production type. The skiving is one of those methods.

It could be expected that skiving It is widely used in national industry as well as in an abroad one. But Unfortunately It isn’t. According to the internet Web Sites and advertisements of world-known machine building companies there are not a lot of companies which apply skiving principles to processing of crankshaft journals, bearing rings and others short bodies of revolution. In this connection I can introduce (e. g. Komatsu Ltd., HELLER Davenport Machine and others). It seems to there are some reasons of the situation.

First of all skiving is a very complex unsteady-state process and it is difficult to investigate. It involves features of different machining process at the same time. It is similar to turning, milling and grinding. The kinematics of the skiving makes working cycle consist of rough, finished and burnished phase. The research achievements of metal cutting machines and tool department allow to state that high accuracy and quality can be reached by using this process It costs lesser than under convenient technological process there is no need of coolant. But It is known no reliable methods of optimum cutting conditions applicable to skiving and it impossible to provide necessary tool life and productivity. But Personally I reckon it is principally possible.

The second reason is that the skiving is well suited for mass production and therefor for design automatic machines. As you know this machine design for the specified production, and, mostly very simple in design. It is well known automate machines can be based on the skiving principle and can be applied to processing crankshaft journals, bearing ring, gears and others workpieces. That is why some times the skiving might also be called as turn broaching, off centering cutting, tangential cutting. I should like to emphasize that machines based on skiving more complex in design and more expensive but they provide higher productivity and demand lesser workers for service. Moreover they could be designed in a vertical arrangement which according to ASME report will be desirable in future.

To make it more clear I’d like to give you an example. You maybe know there is automate machine KA-350 in a laboratory of my department. Its design is based on rotary principle of machine construction which was allowed by skiving. According to my computational results of economical efficiency of application this machine to process bearing ring with 50 mm in inner diameter It is 1.5 time better than up-to-date Ukrainian ones. But unfortunately It is known no real utilization of the machine.

In this way I’d like to conclude that there are two reasons restrained utilization of the skiving technology: scanty knowledge of process and lack of desiring for utilizing of the described machines in the national industry from the factories point of view factories.

In conclusion I’d like to note that the investigation of skiving is need not only for application of the skiving technology to production. I suppose It need to make our knowledge of metal cutting process deeper  and wider. I believe It give rise to new technologies and improving existent ones.

Thank you for your attention. If you have a questions I’d like to answer it.