History of the Automobile 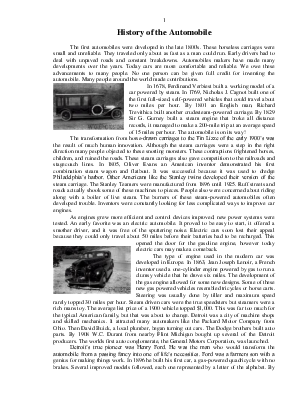 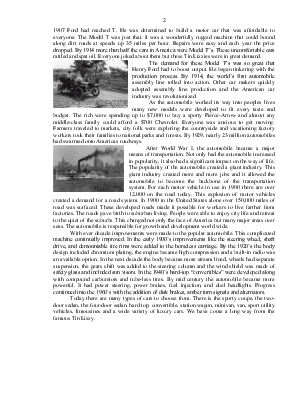 History of the Automobile

The first automobiles were developed in the late 1800's. These horseless carriages were small and unreliable. They traveled only about as fast as a man could run. Early drivers had to deal with unpaved roads and constant breakdowns. Automobiles makers have made many developments over the years. Today cars are more comfortable and reliable. We owe these advancements to many people. No one person can be given full credit for inventing the automobile. Many people around the world made contributions. 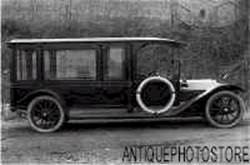 In 1678, Ferdinand Verbiest built a working model of a car powered by steam. In 1769, Nicholas J. Cagnot built one of the first full-sized, self-powered vehicles that could travel about two miles per hour. By 1801 an English man, Richard Trevithica built another crudesteam-powered carriage. By 1829 Sir G. Gurney built a steam engine that broke all distance records, it managed to make a 200-mile trip at an average speed of 15 miles per hour. The automobile is on its way!

The transformation from horse-drawn carriages to the Tin Lizze of the early 1900’s was the result of much human innovation. Although the steam carriages were a step in the right direction many people objected to these snorting monsters. These contraptions frightened horses, children, and ruined the roads. These steam carriages also gave competition to the railroads and stagecoach lines. In 1805, Oliver Evans an American inventor demonstrated his first combination steam wagon and flatboat. It was successful because it was used to dredge Philadelphia’s harbor. Other Americans like the Stanley twins developed their version of the steam carriage. The Stanley Teamers were manufactured from 1896 until 1925. Ruff streets and roads actually shook some of these machines to pieces. People also were concerned about riding along with a boiler of live steam. The burners of these steam-powered automobiles often developed trouble. Inventors were constantly looking for less complicated ways to improve car engines.

As engines grew more efficient and control devices improved, new power systems were tested. An early favorite was an electric automobile. It proved to be easy to start, it offered a smother driver, and it was free of the sputtering noise. Electric cars soon lost their appeal because they could only travel about 50 miles before their batteries had to be recharged. This opened the door for the gasoline engine, however today electric cars may make a comeback. 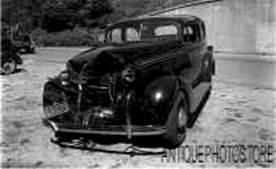 The type of engine used in the modern car was developed in Europe. In 1863, Jean Joseph Lenoir, a French inventor used a one-cylinder engine powered by gas to run a clumsy vehicle that he drove six miles. The development of the gas engine allowed for some new designs. Some of these new gas powered vehicles resembled tricycles or horse carts. Steering was usually done by tiller and maximum speed rarely topped 30 miles per hour. Steam driven cars were the true speedsters but steamers were a rich mans toy. The average list price of a 1900 vehicle topped $1,000. This was far too much for the typical American family, but that was about to change. Detroit was a city of machine shops and skilled mechanics. It attracted many automakers like the Packard Motor Company from Ohio. Then David Buick, a local plumber, began turning out cars. The Dodge brothers built auto parts. By 1908 W.C. Durant from nearby Flint Michigan bought up several of the Detroit producers. The worlds first auto conglomerate, the General Motors Corporation, was launched.

Detroit’s true pioneer was Henry Ford. He was the man who would transform the automobile from a passing fancy into one of life’s necessities. Ford was a farmers son with a genius for making things work. In 1896 he built his first car, a gas-powered quadricycle with no brakes. Several improved models followed, each one represented by a letter of the alphabet. By 1907 Ford had reached T. He was determined to build a motor car that was affordable to everyone. The Model T was just that. It was a wonderfully rugged machine that could bound along dirt roads at speeds up 35 miles per hour. Repairs were easy and each year the price dropped. By 1914 more than half the cars in America were Model T’s. These uncomfortable cars rattled and spat oil. Everyone joked about them but these Tin Lizzies were in great demand. 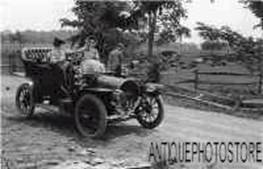 The demand for these Model T’s was so great that Henry Ford had to boost output. He began tinkering with the production process. By 1914, the world’s first automobile assembly line rolled into action. Other car makers quickly adopted assembly line production and the American car industry was revolutionized.

As the automobile worked its way into peoples lives many new models were developed to fit every taste and budget. The rich were spending up to $7,000 to buy a sporty Pierce-Arrow and almost any middle-class family could afford a $700 Chevrolet. Everyone was anxious to get moving. Farmers traveled to markets, city folk were exploring the countryside and vacationing factory workers took their families to national parks and forests. By 1929, nearly 23 million automobiles had swarmed onto Americas roadways. 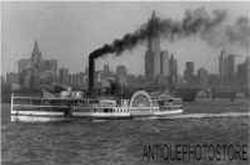 After World War I, the automobile became a major means of transportation. Not only had the automobile increased in popularity, it also had a significant impact on the way of life. The popularity of the automobile created a giant industry. This giant industry created more and more jobs and it allowed the automobile to become the backbone of the transportation system. For each motor vehicle in use in 1900 there are over 12,000 on the road today. This explosion of motor vehicles created a demand for a road system. In 1900 in the United States alone over 150,000 miles of road was surfaced. These developed roads made it possible for workers to live farther from factories. The roads gave birth to suburban living. People were able to enjoy city life and retreat to the quiet of the suburbs. This changed not only the face of America but many major areas over seas. The automobile is responsible for growth and development world wide.

With ever decade improvements were made to the popular automobile. This complicated machine continually improved. In the early 1900’s improvements like the steering wheel, shaft drive, and demountable tire rims were added to the horseless carriage. By the 1920’s the body design included chromium plating, the engine became high compression and a built-in radio was an available option. In the next decade the body became more stream lined, wheels had separate suspension, the gears shift was added to the steering column and the wind shield was made of safety glass and included sun visors. In the 1940’s hard-top “convertibles” were developed along with compound carburetors and tube-less tires. By mid century the automobile became more powerful. It had power steering, power brakes, fuel injection, and duel headlights. Progress continued into the 1960’s with the addition of disk brakes, amber turn signals and alternators.

Today there are many types of cars to choose from. There is the sporty coupe, the two-door sedan, the four-door sedan, hard top, convertible, station wagon, minivan, van, sport utility vehicles, limousines and a wide variety of luxury cars. We have come a long way from the famous Tin Lizzy.