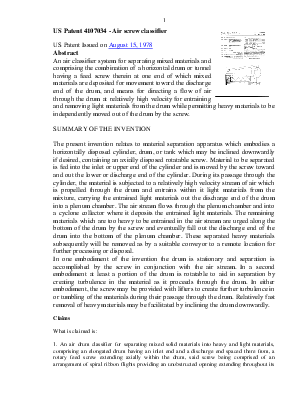 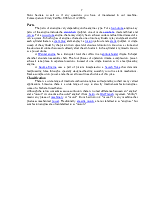 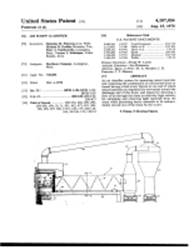 An air classifier system for separating mixed materials and comprising the combination of a horizontal drum or tunnel having a feed screw therein at one end of which mixed materials are deposited for movement toward the discharge end of the drum, and means for directing a flow of air through the drum at relatively high velocity for entraining and removing light materials from the drum while permitting heavy materials to be independently moved out of the drum by the screw.

SUMMARY OF THE INVENTION

The present invention relates to material separation apparatus which embodies a horizontally disposed cylinder, drum, or tank which may be inclined downwardly if desired, containing an axially disposed rotatable screw. Material to be separated is fed into the inlet or upper end of the cylinder and is moved by the screw toward and out the lower or discharge end of the cylinder. During its passage through the cylinder, the material is subjected to a relatively high velocity stream of air which is propelled through the drum and entrains within it light materials from the mixture, carrying the entrained light materials out the discharge end of the drum into a plenum chamber. The air stream flows through the plenum chamber and into a cyclone collector where it deposits the entrained light materials. The remaining materials which are too heavy to be entrained in the air stream are urged along the bottom of the drum by the screw and eventually fall out the discharge end of the drum into the bottom of the plenum chamber. These separated heavy materials subsequently will be removed as by a suitable conveyor to a remote location for further processing or disposal.

In one embodiment of the invention the drum is stationary and separation is accomplished by the screw in conjunction with the air stream. In a second embodiment at least a portion of the drum is rotatable to aid in separation by creating turbulence in the material as it proceeds through the drum. In either embodiment, the screw may be provided with lifters to create further turbulence in or tumbling of the materials during their passage through the drum. Relatively fast removal of heavy materials may be facilitated by inclining the drum downwardly.

What is claimed is:

1. An air drum classifier for separating mixed solid materials into heavy and light materials, comprising an elongated drum having an inlet end and a discharge end spaced there from, a rotary feed screw extending axially within the drum, said screw being comprised of an arrangement of spiral ribbon flights providing an unobstructed opening extending throughout its axis, means for rotating said screw, the drum having an opening