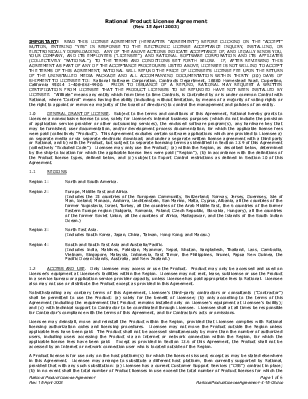 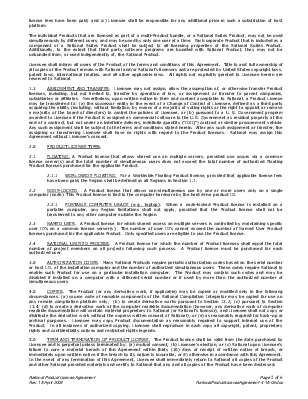 IMPORTANT!  READ THIS LICENSE AGREEMENT (HEREAFTER “AGREEMENT”) BEFORE CLICKING ON THE “ACCEPT” BUTTON, ENTERING “YES” IN RESPONSE TO THE ELECTRONIC LICENSE ACCEPTANCE INQUIRY, INSTALLING, OR ELECTRONICALLY DOWNLOADING.  ANY OF THE ABOVE ACTIONS INDICATE ACCEPTANCE OF, AND LEGALLY BINDS YOU, YOUR COMPANY, AND ITS EMPLOYEES (“LICENSEE”), AND RATIONAL SOFTWARE CORPORATION AND ITS AFFILIATES (COLLECTIVELY “RATIONAL”), TO THE TERMS AND CONDITIONS SET FORTH BELOW.  IF, AFTER REVIEWING THIS AGREEMENT AS PART OF ANY OF THE ACCEPTANCE PROCEDURES LISTED ABOVE, LICENSEE IS NOT WILLING TO ACCEPT THE TERMS OF THIS AGREEMENT, RATIONAL WILL REFUND THE PRICE OF LICENSEE’S LICENSE FEE UPON THE RETURN OF THE UNINSTALLED MEDIA PACKAGE AND ALL ACCOMPANYING DOCUMENTATION WITHIN THIRTY (30) DAYS OF SHIPMENT TO LICENSEE TO:  Rational Software Corporation, Contracts Department, 18880 Homestead Road, Cupertino, California 95014 1-408-863-9900.  PRIOR TO ISSUANCE OF A REFUND, RATIONAL MAY REQUEST A WRITTEN CERTIFICATION FROM LICENSEE THAT THE PRODUCT LICENSES TO BE REFUNDED HAVE NOT BEEN INSTALLED BY LICENSEE.  “Affiliate” means any entity which from time to time Controls, is Controlled by or is under common Control with Rational, where “Control” means having the ability (including, without limitation, by means of a majority of voting rights or the right to appoint or remove a majority of the board of directors) to control the management and policies of an entity.

1.0        GENERAL GRANT OF LICENSE.  Subject to the terms and conditions of this Agreement, Rational hereby grants to Licensee a nonexclusive license to use, solely for Licensee’s internal business purposes (which do not include the provision of application service provider or other outsourcing services), the enclosed software program(s), any hardware key that may be furnished, user documentation, and/or development process documentation, for which the applicable license fees were paid (collectively “Product”).  This Agreement excludes certain software applications which are provided to Licensee a) on separate media or via separate electronic download, and under a separate written license agreement with a third party or Rational, and b) with the Product, but subject to separate licensing terms as identified in Section 13.9 of this Agreement (collectively “Excluded Code”).  Licensee may only use the Product; (a) within the Region, as described below, determined by the ship-to location for which the applicable license fees were paid (“Region”), (b) in accordance with the definitions of the Product license types, defined below, and (c) subject to Export Control restrictions as defined in Section 10 of this Agreement.