The Leadership of Sen. Chris Dodd 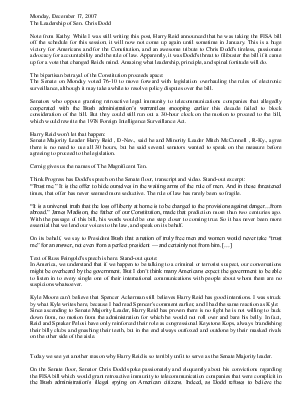 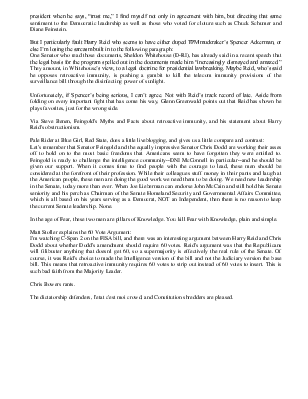 The Leadership of Sen. Chris Dodd

Note from Kathy: While I was still writing this post, Harry Reid announced that he was taking the FISA bill off the schedule for this session; it will now not come up again until sometime in January. This is a huge victory for Americans and for the Constitution, and an awesome tribute to Chris Dodd's tireless, passionate advocacy for accountability and the rule of law. Apparently, it was Dodd's threat to filibuster the bill if it came up for a vote that changed Reid's mind. Amazing what leadership, principle, and spinal fortitude will do.

The bipartisan betrayal of the Constitution proceeds apace:

The Senate on Monday voted 76-10 to move forward with legislation overhauling the rules of electronic surveillance, although it may take awhile to resolve policy disputes over the bill.

Senators who oppose granting retroactive legal immunity to telecommunications companies that allegedly cooperated with the Bush administration’s warrantless snooping earlier this decade failed to block consideration of the bill. But they could still run out a 30-hour clock on the motion to proceed to the bill, which would rewrite the 1978 Foreign Intelligence Surveillance Act.

Senate Majority Leader Harry Reid , D-Nev., said he and Minority Leader Mitch McConnell , R-Ky., agree there is no need to use all 30 hours, but he said several senators wanted to speak on the measure before agreeing to proceed to the legislation.

Cernig gives us the names of The Magnificent Ten.

“Trust me.” It is the offer to hide ourselves in the waiting arms of the rule of men. And in these threatened times, that offer has never seemed more seductive. The rule of law has rarely been so fragile.

“It is a universal truth that the loss of liberty at home is to be charged to the provisions against danger…from abroad.” James Madison, the father of our Constitution, made that prediction more than two centuries ago. With the passage of this bill, his words would be one step closer to coming true. So it has never been more essential that we lend our voices to the law, and speak on its behalf.

On its behalf, we say to President Bush that a nation of truly free men and women would never take “trust me” for an answer, not even from a perfect president — and certainly not from him. […]

In America, we understand that if we happen to be talking to a criminal or terrorist suspect, our conversations might be overheard by the government. But I don’t think many Americans expect the government to be able to listen in to every single one of their international communications with people about whom there are no suspicions whatsoever.

Kyle Moore can't believe that Spencer Ackerman still believes Harry Reid has good intentions. I was struck by what Kyle writes here, because I had read Spencer's comment earlier, and I had the same reaction as Kyle:

Since ascending to Senate Majority Leader, Harry Reid has proven there is no fight he is not willing to back down from, no motion from the administration for which he would not roll over and bare his belly. In fact, Reid and Speaker Pelosi have only reinforced their role as congressional Keystone Kops, always brandishing their billy clubs and gnashing their teeth, but in the end always outfoxed and outdone by their masked rivals on the other side of the aisle.

Today we see yet another reason why Harry Reid is so terribly unfit to serve as the Senate Majority leader.

On the Senate floor, Senator Chris Dodd spoke passionately and eloquently about his convictions regarding the FISA bill which would grant retroactive immunity to telecommunication companies that were complicit in the Bush administration’s illegal spying on American citizens. Indeed, as Dodd refuses to believe the president when he says, “trust me,” I find myself not only in agreement with him, but directing that same sentiment to the Democratic leadership as well as those who voted for cloture such as Chuck Schumer and Diane Feinstein.

But I particularly fault Harry Reid who seems to have either duped TPMmuckraker’s Spencer Ackerman, or else I’m losing the sarcasm built in to the following paragraph:

One Senator who read those documents, Sheldon Whitehouse (D-RI), has already said in a recent speech that the legal basis for the program spelled out in the documents made him “increasingly dismayed and amazed.” They amount, in Whitehouse’s view, to a legal doctrine for presidential lawbreaking. Maybe Reid, who’s said he opposes retroactive immunity, is pushing a gambit to kill the telecom immunity provisions of the surveillance bill through the disinfecting power of sunlight.

Unfortunately, if Spencer’s being serious, I can’t agree. Not with Reid’s track record of late. Aside from folding on every important fight that has come his way, Glenn Greenwald points out that Reid has shown he plays favorites, just for the wrong side.

Via Steve Benen, Feingold's Myths and Facts about retroactive immunity, and his statement about Harry Reid's obstructionism.

Pale Rider at Blue Girl, Red State, does a little liveblogging, and gives us a little compare and contrast:

Let's remember that Senator Feingold and the equally impressive Senator Chris Dodd are working their asses off to hold on to the most basic freedoms that Americans seem to have forgotten they were entitled to. Feingold is ready to challenge the intelligence community--DNI McConnell in particular--and he should be given our support. When it comes time to find people with the courage to lead, these men should be considered at the forefront of their profession. While their colleagues stuff money in their pants and laugh at the American people, these men are doing the good work we need them to be doing. We need new leadership in the Senate, today more than ever. When Joe Lieberman can endorse John McCain and still hold his Senate seniority and his perch as Chairman of the Senate Homeland Security and Governmental Affairs Committee, which is all based on his years serving as a Democrat, NOT an Independent, then there is no reason to keep the current Senate leadership. None.

In the age of Fear, these two men are pillars of Knowledge. You kill Fear with Knowledge, plain and simple.

I'm watching C-Span 2 on the FISA bill, and there was an interesting argument between Harry Reid and Chris Dodd about whether Dodd's amendment should require 60 votes. Reid's argument was that the Republicans will filibuster anything that doesn't get 60, so a supermajority is effectively the real rule of the Senate. Of course, it was Reid's choice to made the Intelligence version of the bill and not the Judiciary version the base bill. This means that retroactive immunity requires 60 votes to strip out instead of 60 votes to insert. This is such bad faith from the Majority Leader.