Bonds. Qualities of Bonds. Bonds vs. shares. Classification of Bonds 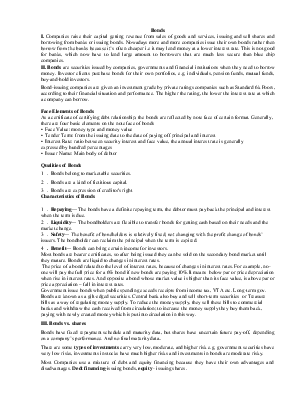 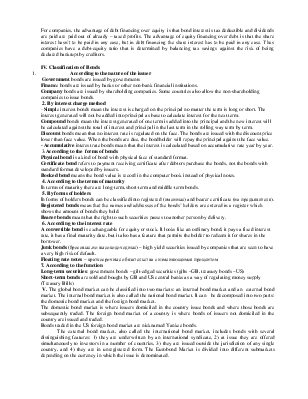 I. Companies raise their capital getting revenue from sales of goods and services, issuing and sell shares and borrowing from banks or issuing bonds. Nowadays more and more companies issue their own bonds rather then borrow from the banks because it’s often cheaper i.e it may lend money at a lower interest rate. This is not good for banks, which now have to lend large amount to borrowers that are much less secure than blue chip companies.

Bond-issuing companies are given an investment grade by private ratings companies such as Standard 6k Poors, according to their financial situation and performance. The higher the rating, the lower the interest rate at which a company can borrow.

As a certificate of certifying debt relationship, the bonds are reflected by note face of certain format. Generally, there are four basic elements on the note face of bonds

•  Tender Term: from the issuing date to the date of paying off principal and interest

2  .  Bonds are a kind of fictitious capital.

3  .  Bonds are expression of creditor's right

1  .  Repaying— The bonds have a definite repaying term, the debtor must pay back the principal and interest when the term is due.

2  .  Liquidity— The bondholders are flexible to transfer bonds for getting cash based on their needs and the market change.

3  .  Safety— The benefit of bondholders is relatively fixed, not changing with the profit change of bonds’ issuers. The bondholder can reclaim the principal when the term is expired.

Most bonds are bearer certificates, so after being issued they can be sold on the secondary bond market until they mature. Bonds are liquid to changes in interest rates.

Government issue bonds when public spending exceeds receipts from income tax, VTA etc. Long-term gov. Bonds are known as a gilt-edged securities. Central bank also buy and sell short-term securities  or Treasure bills as a way of regulating money supply. To reduce the money supply, they sell these bills to commercial banks and withdraw the cash received from circulation; to increase the money supply they buy them back, paying with newly created money which is put into circulation in this way.

Bonds have fixed repayment schedule and maturity data, but shares have uncertain future pay-off, depending on a company’s performance. And no final maturity data..

Most Companies use a mixture of debt and equity financing because they have their own advantages and disadvantages. Dedt financing-issuing bonds, equity - issuing shares.

For companies, the advantage of debt financing over equity  is that bond interest is tax deductible and dividends are paid are paid out of already – taxed profits. The advantage of equity financing over debt is that the share interest hasn’t to be paid in any case, but in debt financing the share interest has to be paid in any case. Thus companies have a debt-equity ratio that is determined by balancing tax savings against the risk of being declared bankrupt by creditors.

1.  According to the nature of the issuer

Government bonds are issued by governments

Finance bonds are issued by banks or other non-bank financial institutions.

- Simple interest bonds mean the interest is charged on the principal no matter the term is long or short. The interest generated will not be added into principal as base to calculate interest for the next term.

Compound bonds mean the interest generated of one term is added into the principal and the new interest will be calculated against the total of interest and principal in the last term in the rolling way term by term.