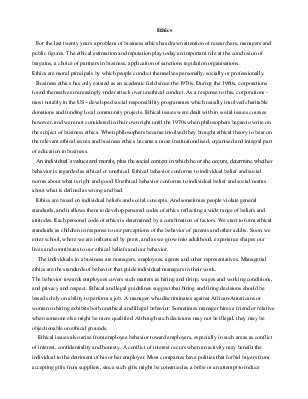 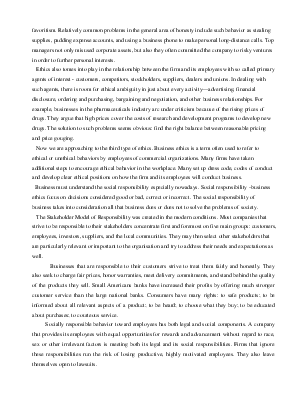 For the last twenty years a problem of business ethics has drawn attention of researchers, managers and public figures. The ethical estimation and reputation play today an important role at the conclusion of bargains, a choice of partners in business, application of sanctions regulation organisations.

Ethics are moral principals by which people conduct themselves personally, socially or professionally.

Business ethics has only existed as an academic field since the 1970s. During the 1960s, corporations found themselves increasingly under attack over unethical conduct. As a response to this, corporations - most notably in the US - developed social responsibility programmes which usually involved charitable donations and funding local community projects. Ethical issues were dealt with in social issues courses however, and were not considered in their own right until the 1970s when philosophers began to write on the subject of business ethics. When philosophers became involved they brought ethical theory to bear on the relevant ethical issues and business ethics became a more institutionalised, organised and integral part of education in business.

Ethics are based on individual beliefs and social concepts. And sometimes people violate general standards, and it allows them to develop personal codes of ethics reflecting a wide range of beliefs and attitudes. Each personal code of ethics is determined by a combination of factors. We start to form ethical standards as children in response to our perceptions of the behavior of parents and other adults. Soon, we enter school, where we are influenced by peers, and as we grow into adulthood, experience shapes our lives and contributes to our ethical beliefs and our behavior.

The individuals in a business are managers, employees, agents and other representatives. Managerial ethics are the standards of behavior that guide individual managers in their work.

The behavior towards employees covers such matters as hiring and firing, wages and working conditions, and privacy and respect. Ethical and legal guidelines suggest that hiring and firing decisions should be based solely on ability to perform a job. A manager who discriminates against African-Americans or women in hiring exhibits both unethical and illegal behavior. Sometimes manager hires a friend or relative when someone else might be more qualified. Although such decisions may not be illegal, they may be objectionable on ethical grounds.

Ethical issues also arise from employee behavior toward employers, especially in such areas as conflict of interest, confi­dentiality and honesty. A conflict of interest occurs when an activity may benefit the individual to the detriment of his or her employer. Most companies have poli­ties that forbid buyers from accepting gifts from suppliers, since such gifts might be construed as a bribe or an attempt to induce favoritism. Relatively common problems in the general area of honesty include such behavior as stealing supplies, padding expense accounts, and using a business phone to make personal long-distance calls. Top managers not only misused corporate assets, but also they often committed the company to risky ventures in order to further personal interests.

Ethics also tomes into play in the relationship between the firm and its employees with so called primary agents of interest - customers, competitors, stockholders, suppliers, dealers andunions. In dealing with such agents, there is room for ethical ambiguity in just about every activity—advertising, financial disclosure, ordering and purchasing, bargaining and negotiation, and other business relationships. For example, businesses in the pharmaceuticals industry arc under criticism because of the rising prices of drugs. They argue that high prices cover the costs of research and development programs to develop new drugs. The solution to such problems seems obvious: find the right balance between reasonable pricing and price gouging.

Now we are approaching to the third type of ethics. Business ethics is a term often used to refer to ethical or unethical behaviors by employees of commercial organizations. Many firms have taken additional steps to encourage ethical behavior in the workplace. Many set up dress code, codes of conduct and develop clear ethical positions on how the firm and its employees will conduct business.

The Stakeholder Model of Responsibility was created in the modern conditions. Most companies that strive to be responsible to their stakeholders concentrate first and foremost on five main groups: customers, employees, investors, suppli­ers, and the local communities. They may then select other stakeholders that are particularly relevant or important to the organisation and try to address their needs and expectations as well.