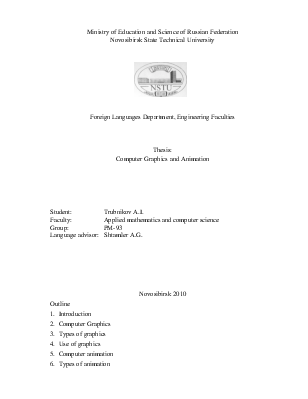 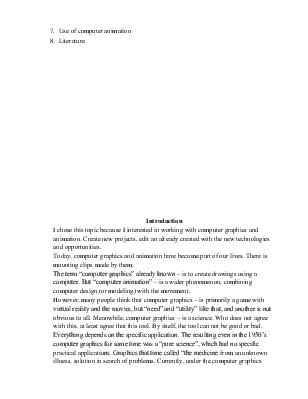 Ministry of Education and Science of Russian Federation

7.  Use of computer animation

I chose this topic because I interested in working with computer graphics and animation. Create new projects, edit an already created with the new technologies and opportunities.

Today, computer graphics and animation have become part of our lives. There is mounting clips made by them.

The term “computer graphics” already known – is to create drawings using a computer. But “computer animation” – is a wider phenomenon, combining computer design (or modeling) with the movement.

However, many people think that computer graphics – is primarily a game with virtual reality and the movies, but “need” and “utility” like that, and another is not obvious to all. Meanwhile, computer graphics – is a science. Who does not agree with this, at least agree that this tool. By itself, the tool can not be good or bad. Everything depends on the specific application. The resulting even in the 1950’s computer graphics for some time was a “pure science”, which had no specific practical applications. Graphics that time called “the medicine from an unknown illness, solution in search of problems. Currently, under the computer graphics understand automate the production, conversion, storage and playback of graphical information by computer. Under the graphic information refers to the model objects and their images. Interactive Computer Graphics – is just the use of computers for the preparation and imaging, but the user can quickly make changes to the image directly in the process of reproduction, expected to work with graphics in a dialogue mode in real time. Interactive graphics is an important part of computer graphics, when the surface of the display with interactive controls.

Under the term “computer animation” fit different technologies. Computer animation can be two-dimensional and three-dimensional. Initially, the artists-animators perceived simply as a computer assistant, which will relieve them of the most difficult and tedious work, but eventually it became clear that his ability far richer: it allows you to simulate any equipment, any material, any style. But even the most advanced computer is only a tool. Many believe that the future – for computer technology, and yet the way in which the film will depend on sitting at a computer person.

Computer Graphics – is part of computer science, concerned with obtaining different images (paintings, drawings, animations) on your computer. Working with computer graphics – one of the most popular uses of the personal computer, and engaged in this work not only professional artists and designers. At any company from time to time there is a need to supply advertisements in newspapers and magazines, in the production of promotional leaflets or booklets. The need for extensive use of graphics software has become particularly noticeable in connection with the development of the Internet and, in the first place, thanks to service World Wide Web, linked together into “web” millions “home pages”. The page is designed against the computer graphics little chance to attract widespread attention. Application of computer graphics is not limited to artistic effect. In all branches of science, technology, medicine, business and management built using computer – assisted schemes, graphs, charts, intended for visual display of various information. Designers, developing new models of cars and planes, using three-dimensional graphics to represent the final form of the product. Architects create on-screen three-dimensional image of the building, and this allows them to see how it fits into the landscape.

·  Raster graphics. They are the principles of image formation in the display on the screen or printed on paper. In a raster graphics image represented as a set of colored dots. This method is called a raster image representation. Bitmapped graphics used in the development of electronic (multimedia) and printing publications. Illustrations made by means of raster graphics, rarely create manually using the software. Most often used for this purpose the scanned images produced by artists, or photos. Recently, to add bitmap images into a computer are widely used digital camera and camcorder. Most graphics programs designed for working with raster illustrations, focused less on the creation of images, how to process them. On the Internet, while only apply bitmap images.