If You Want Power, Be a Conductor. A Travel Agent That Never Rests: Vacations Via Internet 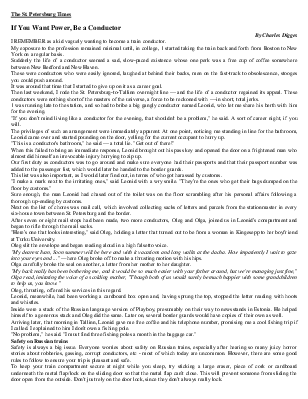 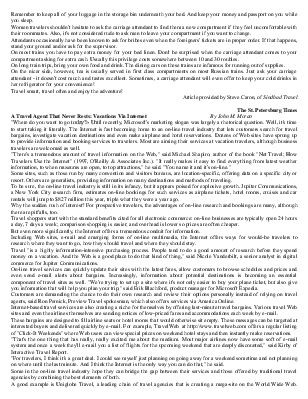 If You Want Power, Be a Conductor

I REMEMBER as a kid vaguely wanting to become a train conductor.

My exposure to the profession remained minimal until, in college, 1 started taking the train back and forth from Boston to New York on a regular basis.

Suddenly the life of a conductor seemed a sad, slow-paced existence whose one perk was a free cup of coffee somewhere between New Bedford and New Haven.

These were conductors who were easily ignored, laughed at behind their backs, men on the fast-track to obsolescence, stooges you could push around.

It was around that time that I started to give up on it as a career goal.

Then last weekend, I rode the St. Petersburg-to-Tallinn overnight line — and the life of a conductor regained its appeal. These conductors were nothing short of the masters of the universe, a force to be reckoned with — in short, total jerks.

1 was running late to the station, and so had to bribe a big gangly conductor named Leonid, who let me share his berth with him for the evening.

"If you don't mind living like a conductor for the evening, that shouldn't be a problem," he said. A sort of career night, if you will.

The privileges of such an arrange­ment were immediately apparent. At one point, noticing me standing in line for the bathroom, Leonid came over and started pounding on the door, yelling for the current occupant to hurry up.

When this failed to bring an immediate response, Leonid brought out his pass key and opened the door on a frightened man who almost did himself an irrevocable injury hurrying to zip up.

Our first duty as conductors was to go around and make sure everyone had their passports and that their passport number was added to the passenger list, which would later be handed to the border guards.

This list was also important, as I would later find out, in terms of who got harassed by customs.

"I make a mark next to the irritating ones," said Leonid with a wry smile. "They're the ones who get their bags dumped on the floor by customs."

Sure enough, the man Leonid had chased out of the toilet was on the floor scrambling after his personal affairs following a thorough up-ending by customs.

Next on the list of chores was mail call, which involved collecting sacks of letters and parcels from the stationmaster in every six-house town between St. Petersburg and the border.

After seven or eight mail stops had been made, two more conductors, Oleg and Olga, joined us in Leonid's compartment and began to rifle through the mail sacks.

"Here's one that looks interesting," said Oleg, holding a letter that turned out to be from a woman in Kingesepp to her boyfriend at Turku University.

Oleg slit the envelope and began reading aloud in a high falsetto voice.

"My dearest Ivan, Soon summer will be here and with it vacations and long walks at the dacha. How impatiently I wait to gaze into your eyes and ..." — here Oleg broke off to make a thrusting motion with his hips.

Olga carefully broke the seal on another, a letter from her mother to her daughter.

"My back really has been bothering me, and it would be so much easier with your father around, but we're managing just fine," Olga read, imitating the voice of a scolding mother, "Though both of us would surely be much happier with some grandchildren to help us, you know."

Oleg, thrusting, offered his services in this regard.

Leonid, meanwhile, had been working a cardboard box open and, having sprung the top, stopped the letter reading with hoots and whistles.

Inside were a stack of the Russian language version of Playboy, presumably on their way to newsstands in Estonia. He helped himself to a generous stack and Oleg did the same. Later on, several border guards would have copies of their own as well.

Arriving later, that morning in Tallinn, Leonid gave me free coffee and his telephone number, promising me a cool fishing trip if I called. I explained to him I don't own a fishing pole.

"No problem," he said. "I must find three fishing poles a month in the baggage car."

Safety is always a big issue. Everyone worries about safety on Russian trains, especially after hearing so many juicy horror stories about robberies, gassing, corrupt conductors, etc - most of which today are uncommon. However, there are some good rules to follow to ensure your trip is pleasant and safe.

To keep your train compartment secure at night while you sleep, try sticking a large eraser, piece of cork or cardboard underneath the metal flap/lock on the sliding door so that the metal flap can't close. This will prevent someone from sliding the door open from the outside. Don't just rely on the door lock, since they don't always really lock.

Remember to keep all of your luggage in the storage bin underneath your bed. And keep your money and passport on you while you sleep.