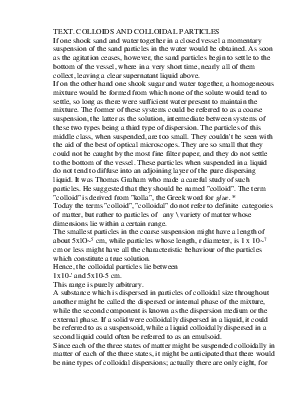 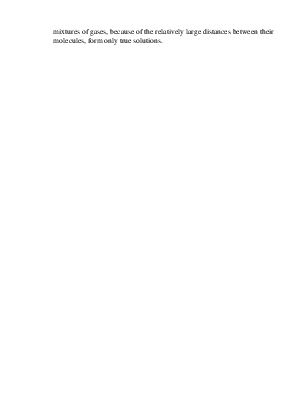 If one shook sand and water together in a closed vessel a momentary suspension of the sand particles in the water would be obtained. As soon as the agitation ceases, however, the sand particles begin to settle to the bottom of the vessel, where in a very short time, nearly all of them collect, leaving a clear supernatant liquid above.

If on the other hand one shook sugar and water together, a homogeneous mixture would be formed from which none of the solute would tend to settle, so long as there were suffi­cient water present to maintain the mixture. The former of these systems could be referred to as a coarse suspension, the latter as the solution, intermediate between systems of these two types being a third type of dispersion. The particles of this middle class, when suspended, are too small. They couldn't be seen with the aid of the best of optical microscopes. They are so small that they could not be caught by the most fine filter paper, and they do not settle to the bottom of the vessel. These particles when suspended in a liquid do not tend to diffuse into an adjoining layer of the pure dispersing liquid. It was Thomas Graham who made a careful study of such particles. He suggested that they should be named "colloid". The term "colloid" is derived from "kolla", the Greek word for glue. *

Today the terms "colloid", "colloidal" do not refer to def­inite  categories  of matter, but rather to particles of   any \ variety of matter whose dimensions lie within a certain range.

The smallest particles in the coarse suspension might have a length of about 5xlO~5 cm, while particles whose length, r diameter, is 1 x 10~7 cm or less might have all the charac­teristic behaviour of the particles which constitute a true solution.

Hence, the colloidal particles lie between

This range is purely arbitrary.