The triads. The element iron plays a special part in the chemical family 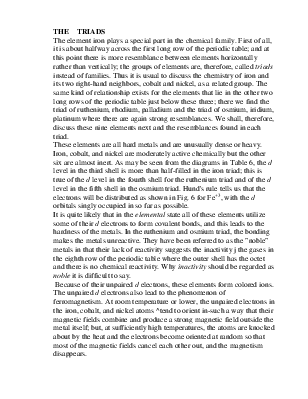 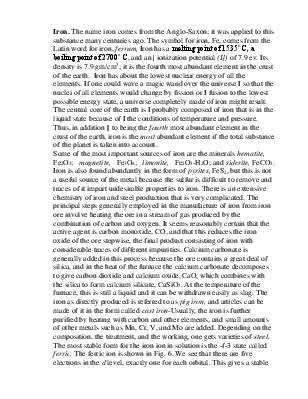 The element iron plays a special part in the chemical family. First of all, it is about halfway across the first long row of the periodic table; and at this point there is more resemblance between elements horizontally rather than vertically; the groups of elements are, therefore, called triads instead of families. Thus it is usual to discuss the chemistry of iron and its two right-hand neighbors, cobalt and nickel, as a related group. The same kind of relationship exists for the elements that lie in the other two long rows of the periodic table just below these three; there we find the triad of ruthenium, rhodium, palladium and the triad of osmium, iridium, platinum where there are again strong re­semblances. We shall, therefore, discuss these nine elements next and the resemblances found in each triad.

These elements are all hard metals and are unusually dense or heavy. Iron, cobalt, and nickel are moderately active chemically but the other six are almost inert. As may be seen from the diagrams in Table 6, the d level in the third shell is more than half-filled in the iron triad; this is true of the d level in the fourth shell for the ruthenium triad and of the d level in the fifth shell in the osmium triad. Hund's rule tells us that the electrons will be distributed as shown in Fig. 6 for Fe+3, with the d orbitals singly occupied in so far as possible.

It is quite likely that in the elemental state all of these elements utilize some of their d electrons to form covalent bonds, and this leads to the hardness of the metals. In the ruthenium and osmium triad, the bonding makes the metals unreactive. They have been referred to as the "noble" metals in that their lack of reactivity suggests the inactivity j the gases in the eighth row of the periodic table where the outer shell has the octet and there is no chemical reactivity. Why inactivity should be regarded as noble it is difficult to say.

Because of their unpaired d electrons, these elements form colored ions. The unpaired d electrons also lead to the phenomenon of ferromagnetism. At room temperature or lower, the unpaired electrons in the iron, cobalt, and nickel atoms ^tend to orient in-such a way that their magnetic fields combine and produce a strong magnetic field outside the metal itself; but, at sufficiently high temperatures, the atoms are knocked about by the heat and the electrons become oriented at random so that most of the magnetic fields cancel each other out, and the magnetism disappears.

Iron. The name iron comes from the Anglo-Saxon; it was ap­plied to this substance many centuries ago. The symbol for iron, Fe, comes from the Latin word for iron, ferrum, Iron has a melting point of 1535° C, a boiling point of 2700° С, and an | ionization potential (I}) of 7.9 ev. Its density is 7.9 gm/cm3; it is the fourth most abundant element in the crust of the earth.  Iron has about the lowest nuclear energy of all the elements. If one could wave a magic wand over the universe I so that the nuclei of all elements would change by fission or I fusion to the lowest possible energy state, a universe completely made of iron might result. The central core of the earth is I probably composed of iron that is in the liquid state because of I the conditions of temperature and pressure. Thus, in addition || to being the fourth most abundant element in the crust of the earth, iron is the most abundant element if the total substance of the planet is taken into account.

Some of the most important sources of iron are the minerals hematite,   Fe2O3;   magnetite,   Fe3O4;   limonite,   Fe2O3-H2O; and siderite, FeCO3. Iron is also found abundantly in the form of pyrites, FeS2, but this is not a useful source of the metal because the sulfur is difficult to remove and traces of it impart undesirable properties to iron. There is an extensive chemistry of iron and steel production that is very complicated. The prin­cipal steps generally employed in the manufacture of iron from iron ore involve heating the ore in a stream of gas produced by the combination of carbon and oxygen. It seems reasonably cer­tain that the active agent is carbon monoxide, CO, and that this reduces the iron oxide of the ore stepwise, the final product consisting of iron with considerable traces of different impuri­ties. Calcium carbonate is generally added in this process because the ore contains a great deal of silica, and in the heat of the furnace the calcium carbonate decomposes to give carbon dioxide and calcium oxide, CaO, which combines with the silica to form calcium silicate, CaSiO3. At the temperature of the furnace, this is still a liquid and it can be withdrawn easily as slag. The iron as directly produced is referred to as pig iron, and articles can be made of it in the form called cast iron-Usually, the iron is further purified by heating with carbon and other elements, and small amounts of other metals such as Mn, Cr, V, and Mo are added. Depending on the composition, the treatment, and the working, one gets varieties of steel.

The most stable form for the iron ion in solution is the -f-3 state called ferric. The ferric ion is shown in Fig. 6. We see that there are five electrons in the d level, exactly one for each orbital. This gives a stable configuration to the outer shell. This oxidation state of iron is also found in the oxide, Fe2O3, and in many compounds such as FeCl3 and Fe(OH)3; the latter is a slimy red-brown and gelatinous substance which can be dehydrated to give the yellowish or reddish oxide, Fe2O3. Iron is also relatively stable when the atom loses the two electrons in the fourth shell and is left with the outer shell of 2, 6, 6 in the third layer; this is called the ferrous ion and it represents the +2 oxida­tion state. Both types of ion in solution are defi­nitely acid. When a base is added to a ferrous solution, a light green precipitate of ferrous hydroxide, Fe(OH)2,