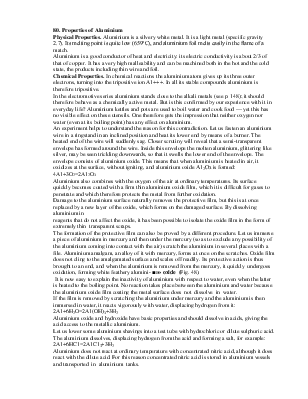 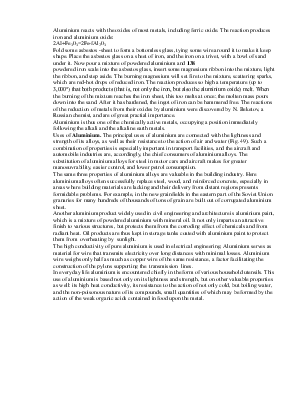 Physical Properties. Aluminium is a silvery white metal. It is a light metal (specific gravity 2.7). Its melting point is quite low (659°C), and aluminium foil melts easily in the flame of a match.

Aluminium is a good conductor of heat and electricity: its electric conductivity is about 2/3 of that of copper. It has a very high malleability and can be machined both in the hot and the cold state, the products including thin wire and foil.

Chemical Properties. In chemical reactions the aluminium atom gives up its three outer electrons, turning into the tripositive ion A1+++. In all its stable compounds aluminium is therefore tripos­itive.

In the electromotive series aluminium stands close to the alkali metals (see p. 148); it should therefore behave as a chemically active metal. But is this confirmed by our experience with it in everyday life? Aluminium kettles and pots are used to boil water and cook food — yet this has no visible effect on these utensils. One therefore gets the impression that neither oxygen nor water (even at its boiling point) has any effect on aluminium.

An experiment helps to understand the reason for this contra­diction. Let us fasten an aluminium wire in a ringstand in an inclined position and heat its lower end by means of a burner. The heated end of the wire will suddenly sag. Closer scrutiny will reveal that a semi-transparent envelope has formed around the wire. Inside this envelope the molten aluminium, glittering like silver, may be seen trickling downwards, so that it swells the lower end of the envelope. The envelope consists of aluminium oxide. This means that when aluminium is heated in air, it oxidizes at the surface, without igniting, and aluminium oxide А12Оз is formed:

Aluminium also combines with the oxygen of the air at ordinary temperatures. Its surface quickly becomes coated with a firm thin aluminium oxide film, which it is difficult for gases to penetrate and which therefore protects the metal from further oxidation.

Damage to the aluminium surface naturally removes the pro­tective film, but this is at once replaced by a new layer of the oxide, which forms on the damaged surface. By dissolving aluminium in

reagents that do not affect the oxide, it has been possible to isolate the oxide film in the form of extremely thin  transparent scraps.

The formation of the protective film can also be proved by a different procedure. Let us immerse a piece of aluminium in mercury and then under the mercury (so as to exclude any possibility of the alu­minium coming into contact with the air) scratch the aluminium in several places with a file. Aluminium amalgam, an alloy of it with mercury, forms at once on the scratches. Oxide film does not cling to the amalgamated surface and scales off readily. Its pro­tective action is thus brought to an end, and when the aluminium is removed from the mercury, it quickly  undergoes oxidation, forming white feathery alumini- ■»» oxide  (Fig. 48).

It is now easy to explain the inactivity of alumini­um with respect to water, even when the latter is heat­ed to the boiling point. No reaction takes place between the alumi­nium and water because the aluminium oxide film coating the metal surface does  not  dissolve  in  water.

If the film is removed by scratching the aluminium under mer­cury and the aluminium is then immersed in water, it reacts vigor­ously with water, displacing hydrogen from it:

Aluminium oxide and hydroxide have basic properties and should dissolve in acids, giving the acid access to the metallic aluminium.

Let us lower some aluminium shavings into a test tube with hydrochloric or dilute sulphuric acid. The aluminium dissolves, displacing hydrogen from the acid and forming a salt, for example: