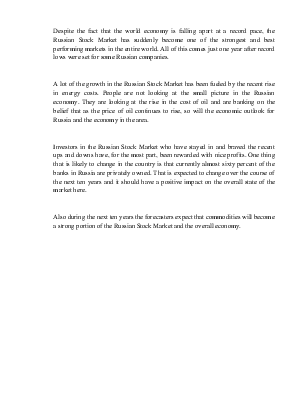 Despite the fact that the world economy is falling apart at a record pace, the Russian Stock Market has suddenly become one of the strongest and best performing markets in the entire world. All of this comes just one year after record lows were set for some Russian companies.

A lot of the growth in the Russian Stock Market has been fueled by the recent rise in energy costs. People are not looking at the small picture in the Russian economy. They are looking at the rise in the cost of oil and are banking on the belief that as the price of oil continues to rise, so will the economic outlook for Russia and the economy in the area.

Investors in the Russian Stock Market who have stayed in and braved the recent ups and downs have, for the most part, been rewarded with nice profits. One thing that is likely to change in the country is that currently almost sixty percent of the banks in Russia are privately owned. That is expected to change over the course of the next ten years and it should have a positive impact on the overall state of the market here.

Also during the next ten years the forecasters expect that commodities will become a strong portion of the Russian Stock Market and the overall economy.