The city of Novokuznetsk is a historical, geographical and economic centre of the South Kuzbas 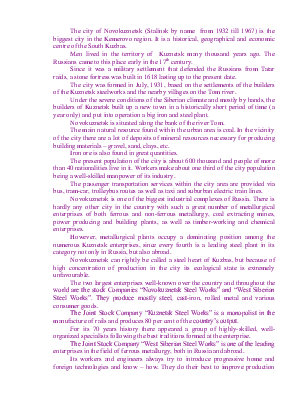 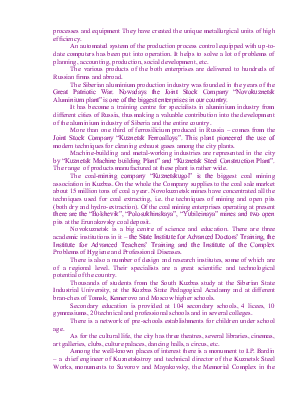 The city of Novokuznetsk (Stalinsk by name  from 1932 till 1967) is the biggest city in the Kemerovo region. It is a historical, geographical and economic centre of the South Kuzbas.

Men lived in the territory of  Kuznetsk many thousand years ago. The Russians came to this place early in the 17th century.

Since it was a military settlement that defended the Russians from Tatar raids, a stone fortress was built in 1618 lasting up to the present date.

The city was formed in July, 1931, based on the settlements of the builders of the Kuznetsk steelworks and the nearby villages on the Tom river.

Under the severe conditions of the Siberian climate and mostly by hands, the builders of Kuznetsk built up a new town in a historically short period of time (a year only) and put into operation a big iron and steel plant.

Novokuznetsk is situated along the bank of the river Tom.

The main natural resource found within the urban area is coal. In the vicinity of the city there are a lot of deposits of mineral resources necessary for producing building materials – gravel, sand, clays, etc.

The present population of the city is about 600 thousand and people of more than 40 nationalities live in it. Workers make about one third of the city population being a well-skilled manpower of its industry.

The passenger transportation services within the city area are provided via bus, tram-car, trolleybus routes as well as taxi and suburban electric train lines.

Novokuznetsk is one of the biggest industrial complexes of Russia. There is hardly any other city in the country with such a great number of metallurgical enterprises of both ferrous and non-ferrous metallurgy, coal extracting mines, power producing and building plants, as well as timber-working and chemical enterprises.

However, metallurgical plants occupy a dominating position among the numerous Kuznetsk enterprises, since every fourth is a leading steel plant in its category not only in Russia, but also abroad.

Novokuznetsk can rightly be called a steel heart of Kuzbas, but because of high concentration of production in the city its ecological state is extremely unfavourable.

The two largest enterprises well-known over the country and throughout the world are the stock Companies “Novokuznetsk Steel Works” and “West Siberian Steel Works”. They produce mostly steel, cast-iron, rolled metal and various consumer goods.

The Joint Stock Company “Kuznetsk Steel Works” is a monopolist in the manufacture of rails and produces 80 per cent of the country’s output.

For its 70 years history there appeared a group of highly-skilled, well-organized specialists following the best traditions formed at the enterprise.

The Joint Stock Company “West Siberian Steel Works” is one of the leading enterprises in the field of ferrous metallurgy, both in Russia and abroad.

Its workers and engineers always try to introduce progressive home and foreign technologies and know – how. They do their best to improve production processes and equipment They have created the unique metallurgical units of high efficiency.

An automated system of the production process control equipped with up-to-date computers has been put into operation. It helps to solve a lot of problems of planning, accounting, production, social development, etc.

The various products of the both enterprises are delivered to hundreds of Russian firms and abroad.

The Siberian aluminium production industry was founded in the years of the Great Patriotic War. Nowadays the Joint Stock Company “Novokuznetsk Aluminium plant” is one of the biggest enterprises in our country.

More than one third of ferrosilicium produced in Russia – comes from the Joint Stock Company “Kuznetsk Ferroalloys”. This plant pioneered the use of modern techniques for cleaning exhaust gases among the city plants.

Machine-building and metal-working industries are represented in the city by “Kuznetsk Machine building Plant” and “Kuznetsk Steel Construction Plant”. The range  of products manufactured at these plant is rather wide.

The coal-mining company “Kuznetskugol” is the biggest coal mining association in Kuzbas. On the whole the Company supplies to the coal sale market about 15 million tons of coal a year. Novokuznetsk mines have concentrated all the techniques used for coal extracting, i.e. the techniques of mining and open pits (both dry and hydro-extraction). Of the coal mining enterprises operating at present there are the “Bolshevik”, “Polosukhinskaya”, “Yubileinaya” mines and two open pits at the Erunakovsky coal deposit.

There is also a number of design and research institutes, some of which are of a regional level. Their specialists are a great scientific and technological potential of the country.

Thousands of students from the South Kuzbas study at the Siberian State Industrial University, at the Kuzbas State Pedagogical Acadamy and at different bran-ches of Tomsk, Kemerovo and Moscow higher schools.

There is a network of pre-schools establishments for children under school age.

Among the well-known places of interest there is a monument to I.P. Bardin – a chief engineer of Kuznetskstroy and technical director of the Kuznetsk Steel Works, monuments to Suvorov and Mayakovsky, the Memorial Complex in the Victory Square with a tank made in the war years of Kuznetsk Steel, the House of Dostoevsky, boulveard of Heroes, a historical and architectural museum “Kuznetsk Fortres”, a museum of local history, and some other museums.

In 1971 Novokuznetsk was awarded  an Order of the Red Banner of Labour for its advances in the development of ferrous metallurgy.

In 1981 it was awarded an Order of the October Revolution for its citizens, contribution to the defeat of the fascist invadors during the Great Patriotic War.

In 1998 the city of Novokuznetsk celebrated its 380th anniversary.