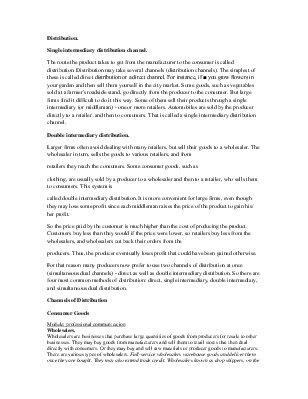 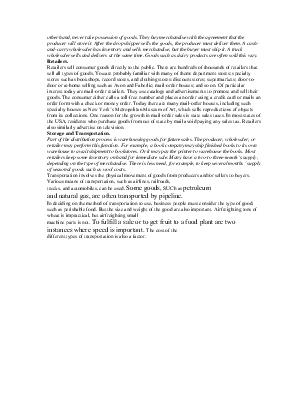 The route the product takes to get from the manufacturer to the consumer is called distribution. Distribution may take several channels (distribution channels). The simplest of these is called direct distribution or a direct channel. For instance, if ■ you grow flowers in your garden and then sell them yourself in the city market. Some goods, such as vegetables sold at a farmer's roadside stand, go directly from the producer to the consumer. But large firms find it difficult to do it this way. Some of them sell their products through a single intermediary (or middleman) - one or more retailers. Automobiles are sold by the producer directly to a retailer .and then to consumers. That is called a single intermediary distribution channel.

Larger firms often avoid dealing with many retailers, but sell their goods to a wholesaler. The wholesaler in turn, sells the goods to various retailers, and from

retailers they reach the consumers. Some consumer goods, such as

clothing, are usually sold by a producer to a wholesaler and then to a retailer, who sells them to consumers. This system is

called double intermediary distribution. It is more convenient for large firms, even though they may lose some profit since each middleman raises the price of the product to gain his/ her profit.

So the price paid by the customer is much higher than the cost of producing the product. Customers buy less than they would if the price were lower, so retailers buy less from the wholesalers, and wholesalers cut back their orders from the

producers. Thus, the producer eventually loses profit that could have been gained otherwise.

Wholesalers are businesses that purchase large quantities of goods from producers for resale to other businesses. They may buy goods from manufacturers and sell them to retail stores that then deal directly with consumers. Or they may buy and sell raw materials or producer goods to manufacturers.

There are various types of wholesalers. Full-service wholesalers warehouse goods and deliver them once they are bought. They may also extend trade credit. Wholesalers known as drop shippers, on the other hand, never take possession of goods. They buy merchandise with the agreement that the producer will store it. After the drop shipper sells the goods, the producer must deliver them. A cash- and-carry wholesaler has inventory and sells merchandise, but the buyer must ship it. A truck wholesaler sells and delivers at the same time. Goods such as dairy products are often sold this way.

Retailers sell consumer goods directly to the public. There are hundreds of thousands of retailers that sell all types of goods. You are probably familiar with many of them: department stores; specialty stores such as bookshops, record stores, and clothing stores: discount stores; supermarkets; door-to-door or at-home selling such as Avon and Faberlic; mail-order houses; and so on. Of particular interest today are mail-order retailers. They use catalogs and advertisements to promote and sell their goods. The consumer either calls a toll-free number and places an order using a credit card or mails an order form with a check or money order. Today there are many mail-order houses, including such specialty houses as New York’s Metropolitan Museum of Art, which sells reproductions of objects from its collections. One reason for the growth in mail-order sales is state sales taxes. In most states of the USA, residents who purchase goods from out of state by mail avoid paying any sales tax. Retailers also similarly advertise on television.

Part of the distribution process is warehousing goods for future sales. The producer, wholesaler, or retailer may perform this function. For example, a book company may ship finished books to its own warehouse to await shipment to bookstores. Or it may pay the printer to warehouse the books. Most retailers keep some inventory on hand for immediate sale. Many have a two-to three-month’s supply, depending on the type of merchandise. There is less need, for example, to keep several months ' supply of seasonal goods such as wool coats.

Transportation involves the physical movement of goods from producers and/or sellers to buyers. Various means of transportation, such as airlines, railroads,

trucks, and automobiles, can be used. Some goods, SUCh as petroleum

and natural gas, are often transported by pipeline.

In deciding on the method of transportation to use, business people must consider the type of good, such as perishable food. But the size and weight of the good are also important. Airfreighting tons of wheat is impractical, but airfreighting small

machine parts is not. To fulfill a sale or to get fruit to a food plant are two instances where speed is important. The cost of the

different types of transportation is also a factor.