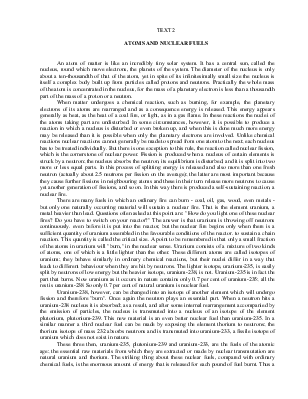 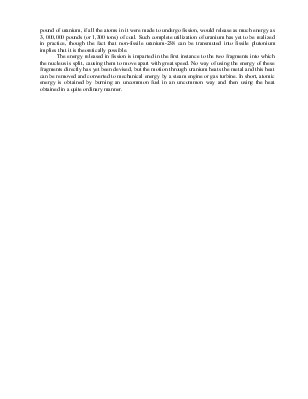 An atom of matter is like an incredibly tiny solar system. It has a central sun, called the nucleus, round which move electrons, the planets of the system. The diameter of the nucleus is only about a ten-thousandth of that of the atom, yet in spite of its infinitesimally small size the nucleus is itself a complex body built up from particles called protons and neutrons. Practically the whole mass of the atom is concentrated in the nucleus, for the mass of a planetary electron is less than a thousandth part of the mass of a proton or a neutron.

When matter undergoes a chemical reaction, such as burning, for example, the planetary electrons of its atoms are rearranged and as a consequence energy is released. This energy appears generally as heat, as the heat of a coal fire, or light, as in a gas flame. In these reactions the nuclei of the atoms taking part are undisturbed. In some circumstances, however, it is possible to produce a reaction in which a nucleus is disturbed or even broken up, and when this is done much more energy may be released than it is possible when only the planetary electrons are involved. Unlike chemical reactions nuclear reactions cannot generally be made to spread from one atom to the next; each nucleus has to be treated individually. But there is one exception to this rule, the reaction called nuclear fission, which is the cornerstone of nuclear power. Fission is produced when a nucleus of certain elements is struck by a neutron; the nucleus absorbs the neutron, its equilibrium is disturbed, and it is split into two more or less equal parts. In this process of splitting energy is released and also more than one fresh neutron (actually about 2.5 neutrons per fission on the average); the latter are most important because they cause further fissions in neighbouring atoms and these in their turn release more neutrons to cause yet another generation of fissions, and so on. In this way there is produced a self-sustaining reaction, a nuclear fire.

There are many fuels in which an ordinary fire can burn - coal, oil, gas, wood, even metals - but only one naturally occurring material will sustain a nuclear fire. That is the element uranium, a metal heavier than lead. Questions often asked at this point are: "How do you light one of these nuclear fires? Do you have to switch on your reactor?" The answer is that uranium is throwing off neutrons continuously. even before it is put into the reactor, but the nuclear fire begins only when there is a sufficient quantity of uranium assembled in the favourable conditions of the reactor. to sustain a chain reaction. This quantity is called the critical size. A point to be remembered is that only a small fraction of the atoms in uranium will "burn," in the nuclear sense. Uranium consists of a mixture of two kinds of atoms, one of which is a little lighter than the other. These different atoms are called isotopes of uranium; they behave similarly in ordinary chemical reactions, but their nuclei differ in a way that leads to different behaviour when they are hit by neutrons. The lighter isotope, uranium-235, is easily split by neutrons of low energy but the heavier isotope, uranium-238, is not. Uranium-235 is in fact the part that burns. Now uranium as it occurs in nature contains only 0.7 per cent of uranium-235; all the rest is uranium-238 So only 0.7 per cent of natural uranium is nuclear fuel.