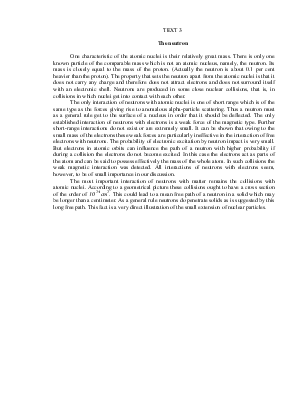 One characteristic of the atomic nuclei is their relatively great mass. There is only one known particle of the comparable mass which is not an atomic nucleus, namely, the neutron. Its mass is closely equal to the mass of the proton. (Actually the neutron is about 0.1 per cent heavier than the proton). The property that sets the neutron apart from the atomic nuclei is that it does not carry any charge and therefore does not attract electrons and does not surround itself with an electronic shell. Neutrons are produced in some close nuclear collisions, that is, in collisions in which nuclei get into contact with each other.

The only interaction of neutrons with atomic nuclei is one of short range which is of the same type as the forces giving rise to anomalous alpha-particle scattering. Thus a neutron must as a general rule get to the surface of a nucleus in order that it should be deflected. The only established interaction of neutrons with electrons is a weak force of the magnetic type. Further short-range interactions do not exist or are extremely small. It can be shown that owing to the small mass of the electrons these weak forces are particularly ineffective in the interaction of free electrons with neutrons. The probability of electronic excitation by neutron impact is very small. But electrons in atomic orbits can influence the path of a neutron with higher probability if during a collision the electrons do not become excited. In this case the electrons act as parts of the atom and can be said to possess effectively the mass of the whole atom. In such collisions the weak magnetic interaction was detected. All interactions of neutrons with electrons seem, however, to be of small importance in our discussion.

The most important interaction of neutrons with matter remains the collisions with atomic nuclei. According to a geometrical picture these collisions ought to have a cross section of the order of 10-24 cm2. This could lead to a mean free path of a neutron in a solid which may be longer than a centimeter. As a general rule neutrons do penetrate solids as is suggested by this long free path. This fact is a very direct illustration of the small extension of nuclear particles.