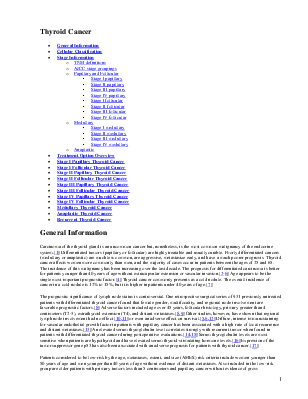 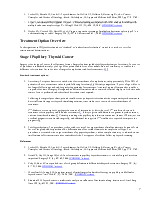 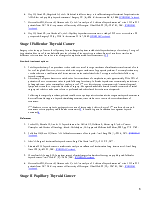 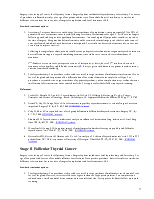 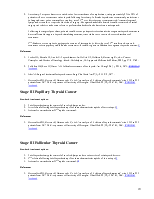 Carcinoma of the thyroid gland is an uncommon cancer but, nonetheless, is the most common malignancy of the endocrine system.[1] Differentiated tumors (papillary or follicular) are highly treatable and usually curable. Poorly differentiated cancers (medullary or anaplastic) are much less common, are aggressive, metastasize early, and have a much poorer prognosis. Thyroid cancer affects women more commonly than men, and the majority of cases occur in patients between the ages of 25 and 65. The incidence of this malignancy has been increasing over the last decade. The prognosis for differentiated carcinoma is better for patients younger than 40 years of age without extracapsular extension or vascular invasion.[2-6] Age appears to be the single most important prognostic factor.[4] Thyroid cancer commonly presents as a cold nodule. The overall incidence of cancer in a cold nodule is 12% to 15%, but it is higher in patients under 40 years of age.[7]

The prognostic significance of lymph node status is controversial. One retrospective surgical series of 931 previously untreated patients with differentiated thyroid cancer found that female gender, multifocality, and regional node involvement are favorable prognostic factors.[8] Adverse factors included age over 45 years, follicular histology, primary greater than 4 centimeters (T2-3), extrathyroid extension (T4), and distant metastases.[8,9] Other studies, however, have shown that regional lymph node involvement had no effect [10,11] or even an adverse effect on survival.[5,6,12] Diffuse, intense immunostaining for vascular endothelial growth factor in patients with papillary cancer has been associated with a high rate of local recurrence and distant metastases.[13] An elevated serum thyroglobulin level correlates strongly with recurrent tumor when found in patients with differentiated thyroid cancer during postoperative evaluations.[14,15] Serum thyroglobulin levels are most sensitive when patients are hypothyroid and have elevated serum thyroid-stimulating hormone levels.[16] Expression of the tumor suppressor gene p53 has also been associated with an adverse prognosis for patients with thyroid cancer.[17]

Patients considered to be low-risk by the age, metastases, extent, and size (AMES) risk criteria include women younger than 50 years of age and men younger than 40 years of age without evidence of distant metastases. Also included in the low-risk group are older patients with primary tumors less than 5 centimeters and papillary cancer without evidence of gross extrathyroid invasion or follicular cancer without either major capsular invasion or blood vessel invasion.[3] Using these criteria, a retrospective study of 1019 patients showed that the 20-year survival rate is 98% for low-risk patients and 50% for high-risk patients.[3]

Patients with a history of radiation administered in infancy and childhood for benign conditions of the head and neck, such as enlarged thymus, acne, or tonsillar or adenoidal enlargement have an increased risk of cancer as well as other abnormalities of the thyroid gland. In this group of patients, malignancies of the thyroid gland first appear beginning as early as 5 years following radiation and may appear 20 or more years later.[18] Radiation exposure as a consequence of nuclear fall-out has also