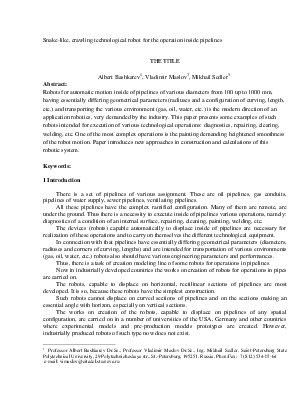 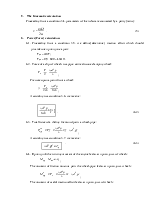 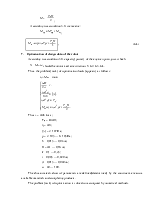 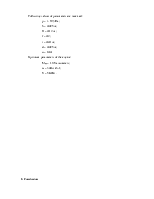 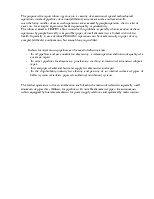 Snake-like, crawling technological robot for the operation inside pipelines

Robots for automatic motion inside of pipelines of various diameters from 100 up to 1000 mm, having essentially differing geometrical parameters (radiuses and a configuration of curving, length, etc.) and transporting the various environment (gas, oil, water, etc.) is the modern direction of an application robotics, very demanded by the industry. This paper presents some examples of such robots intended for execution of various technological operations: diagnostics, repairing, clearing, welding, etc. One of the most complex operations is the painting demanding heightened smoothness of the robot motion. Paper introduces new approaches in construction and calculations of this robotic system.

All these pipelines have the complex ramified configuration. Many of them are remote, are under the ground. Thus there is a necessity to execute inside of pipelines various operations, namely: diagnostics of a condition of an internal surface, repairing, cleaning, painting, welding, etc.

The devices (robots) capable automatically to displace inside of pipelines are necessary for realization of these operations and to carry on themselves the different technological equipment.

In connection with that pipelines have essentially differing geometrical parameters (diameters, radiuses and corners of curving, lengths) and are intended for transportation of various environments (gas, oil, water, etc.) robots also should have various engineering parameters and performances.

Thus, there is a task of creation modeling line of some robots for operations in pipelines.

Now in industrially developed countries the works on creation of robots for operations in pipes are carried on.

The robots, capable to displace on horizontal, rectilinear sections of pipelines are most developed. It is so, because these robots have the simplest construction.

Such robots cannot displace on curved sections of pipelines and on the sections making an essential angle with horizon, especially on vertical sections.

The works on creation of the robots, capable to displace on pipelines of any spatial configuration, are carried on in a number of universities of the USA, Germany and other countries where experimental models and pre-production models prototypes are created. However, industrially produced robots of such type now does not exist.

Department “Management of Innovation@ of Mechanical Engineering Faculty of St.-Petersburg State Polytechnical University since 2002 carries on works on development, manufacture and introduction in industry of some models of robots for operations in pipelines, in particular for painting, clearing, diagnostics and repairing internal surfaces of pipes. Their application solves a problem of transportation technological and the measurement equipments inside of long (up to 7 meters) curved pipes of the any shape - straight lines, Г-shaped, П-shaped (in different planes) and Z-shaped, diameter from 200 up to 500мм. The given equipment is named by the Complex because its structure includes the modules executing inside of pipes technological operations of  a videoinspection, of paint and varnish coverages, monitoring of width of a coverage, and also the transport shake-like robot realizing motion of the technological and control - measuring instrument.

During development the exemplar of robot RT-0,2/0,5 - 1 is created. The robot is equipped by a flexible multiarticulate hand of the serpentine construction easily displaced inside a curved pipe, transporting the technological and control - measuring instrument. The robot has a  mechanisms of rise and of a hand. A drive of movements of the robot - electromechanical, regulated. The base of the robot is placed on wheels; the robot can easily displace on the shop flow. The construction of a hand ensures a centering of technological and control - measuring heads in a pipe of any diameter. Control of the robot is carried out with the human controller from the board on which there are situated  all devices of the Complex.

Characteristics of a pre-production prototype of the robot for operations in pipes РТ-0,2/0,5-1 are presented below.