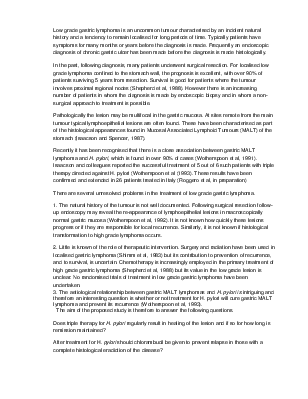 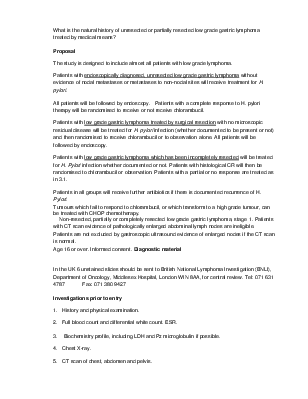 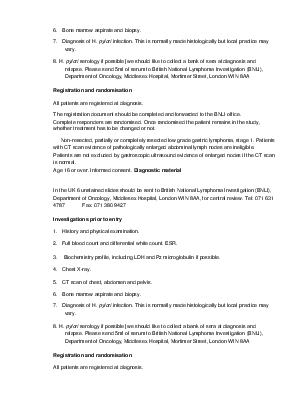 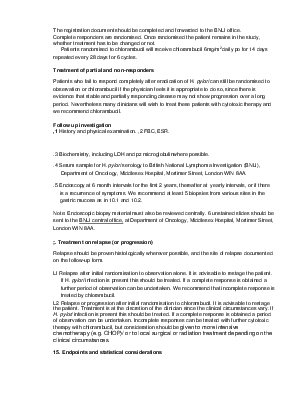 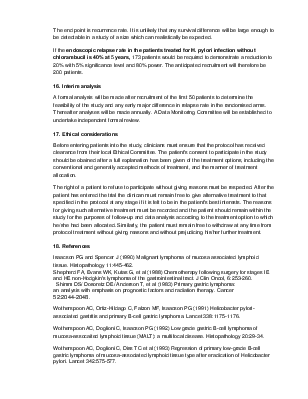 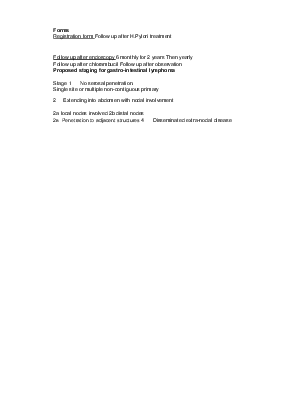 In the past, following diagnosis, many patients underwent surgical resection. For localised low grade lymphoma confined to the stomach wall, the prognosis is excellent, with over 90% of patients surviving 5 years from resection. Survival is good for patients where the tumour involves proximal regional nodes (Shepherd et al, 1988). However there is an increasing number of patients in whom the diagnosis is made by endoscopic biopsy and in whom a non-surgical approach to treatment is possible.

Pathologically the lesion may be multifocal in the gastric mucosa. At sites remote from the main tumour typical lymphoepithelial lesions are often found. These have been characterised as part of the histological appearances found in Mucosal Associated Lymphoid Tumours (MALT) of the stomach (Isaacson and Spencer, 1987).

Recently it has been recognised that there is a close association between gastric MALT lymphoma and H. pylori, which is found in over 90% of cases (Wotherspoon et al, 1991). Isaacson and colleagues reported the successful treatment of 5 out of 6 such patients with triple therapy directed against H. pylori (Wotherspoon et al (1993). These results have been confirmed and extended in 26 patients treated in Italy (Roggero et al, in preparation)

There are several unresolved problems in the treatment of low grade gastric lymphoma.

1. The natural history of the tumour is not well documented. Following surgical resection follow-up endoscopy may reveal the re-appearance of lymphoepithelial lesions in macroscopically normal gastric mucosa (Wotherspoon et al, 1992). It is not known how quickly these lesions progress or if they are responsible for local recurrence. Similarly, it is not known if histological transformation to high grade lymphoma occurs.

The aim of the proposed study is therefore to answer the following questions.

Does triple therapy for H. pylori regularly result in healing of the lesion and if so for how long is remission maintained?

After treatment for H. pylori should chlorambucil be given to prevent relapse in those with a complete histological eradiction of the disease?

What is the natural history of unresected or partially resected low grade gastric lymphoma treated by medical means?

The study is designed to include almost all patients with low grade lymphoma.

All patients will be followed by endoscopy.   Patients with a complete response to H. pylori therapy will be randomised to receive or not receive chlorambucil.

Patients with low grade gastric lymphoma treated by surgical resection with no microscopic residual disease will be treated for H. pylori infection (whether documented to be present or not) and then randomised to receive chlorambucil or to observation alone. All patients will be followed by endoscopy.

Patients with low grade gastric lymphoma which has been incompletely resected will be treated for H. Pylori infection whether documented or not. Patients with histological CR will then be randomised to chlorambucil or observation. Patients with a partial or no response are treated as in 3.1.

Patients in all groups will receive further antibiotics if there is documented recurrence of H. Pylori.