Recent Advances in the Biology and Treatment of Acute Promyelocytic Leukemia 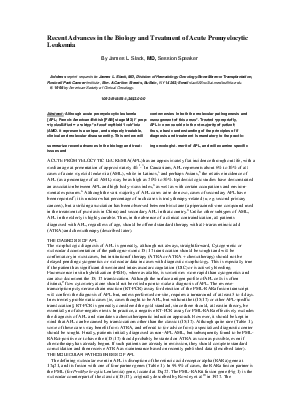 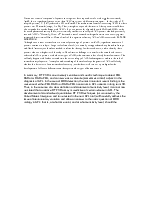 Recent Advances in the Biology and Treatment of Acute Promyelocytic Leukemia

®1998 by American Society of Clinical Oncology.

Abstract: Although acute promyelocytic leukemla              controversies In both the molecular pathogenesis and

(AMD. it represents a unique, and uniquely treatable,         thus, e basic understanding of the principles of if

clinical and molecular disease entity. This review will       diagnosis and treatment Is mandatory to the practlc-

summarize recent advances In the biology and treat-         ing oncologlst. merit of APL, and will examine specific issues and

ACUTE PROMYELOCYTIC LEUKEMIA(APL) has an approximately flat incidence throughout life, with a median age at presentation of approximately 40.1-3 In Caucasians, APL represents about 6% to 10% of all cases of acute myeloid leukemia (AML), while in Latinos,4 and perhaps Asians,5 the relative incidence of APL (as a percentage of all AML) may be as high as 20% to 30%. Epidemiologic studies have demonstrated an association between APL and high body-mass index,8 as well as with certain occupations and environmental exposures.6 Although the vast majority of APL cases arise de novo, cases of secondary APL have been reported7; it is unclear what percentage of such cases is truly therapy-related (u, eg, second primary cancers), but a striking association has been observed between bimolane (a piperazinedi-one compound used in the treatment of psoriasis in China) and secondary APL in that country.8 Unlike other subtypes of AML, APL in the elderly is highly curable. Thus, in the absence of a clinical contraindication, all patients diagnosed with APL, regardless of age, should be offered standard therapy with all-traras retinoic add (ATRA) and chemotherapy (described later).

THE DIAGNOSIS OF APL

The morphologic diagnosis of APL is generally, although not always, straightforward, Cytoge-netic or molecular documentation of the pathogno-monic 15; 17 translocation should be sought and will be confirmatory in most cases, but institutionof therapy (ATRA or ATRA + chemotherapy) should not be delayed pending cytogenetics or molecular data in cases with diagnostic morphology. This is especially true if the patient has significant disseminated intravascular coagulation (DIC) or is actively bleeding. Fluorescence in situ hybridization (FISH), where available, is sometimes more rapid than cytogenetics and can also document the 15; 17 translocation. Although the surface antigen profile ofAPL cells is often distinct,9 flow cytometry alone should not be relied upon to make a diagnosis ofAPL. The reverse-transcription polymerase chain reaction (RT-PCR) assay for detection of the PML-RARa fusion transcript will confirm the diagnosis of APL but, unless performed on-site, requires a turnaround of at least 3 to 4 days. In extremely problematic cases [ie, cases thought to be APL, but without the t(15;17) or other APL-spedfic translocation], RT-PCR is generally considered the gold standard, since there should, at least in theory, be essentially no false-negative tests. In practice, a negative RT-PCR assay for PML-RARa effectively excludes the diagnosis of APL and mandates a chemotherapeutic induction approach. However, it should be kept in mind that APL can be caused by translocations other than the classic t(15;17). Although quite rare (Table 1), some of these cases may benefit from ATRA, and referral to (or advice from) a specialized diagnostic center should be sought. Finally, patients initially diagnosed as non-APL AML, but subsequently found to be PML-RARct-positive or to have the t(15;17) should probably be started on ATRA as soon as possible, even if chemotherapy has already begun. If such patients are already in remission, they should complete standard consolidation and then receive ATRA as maintenance based on recently published data (described later). THE MOLECULAR PATHOGENESIS OF APL