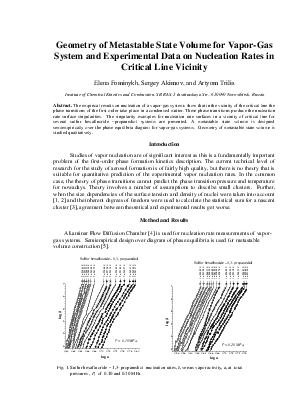 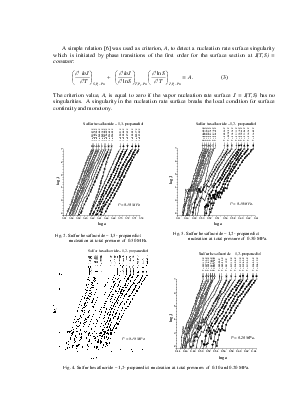 Abstract. The empirical results on nucleation of a vapor-gas systems show that in the vicinity of the critical line the phase transitions of the first order take place in a condensed matter. These phase transitions produce the nucleation rate surface singularities.  The singularity examples for nucleation rate surfaces in a vicinity of critical line for several sulfur hexafluoride –propanediol systems are presented. A metastable state volume is designed semiempirically over the phase equilibria diagram for vapor-gas systems.  Geometry of metastable state volume is studied qualitatively.

Studies of vapor nucleation are of significant interest as this is a fundamentally important problem of the first-order phase formation kinetics description. The current technical level of research for the study of aerosol formation is of fairly high quality, but there is no theory that is suitable for quantitative prediction of the experimental vapor nucleation rates. In the common case, the theory of phase transitions cannot predict the phase transition pressure and temperature for nowadays. Theory involves a number of assumptions to describe small clusters.  Further, when the size dependencies of the surface tension and density of nuclei were taken into account [1, 2] and the inherent degrees of freedom were used to calculate the statistical sum for a nascent cluster [3], agreement between theoretical and experimental results get worse.

A simple relation [6] was used as criterion, A, to detect a nucleation rate surface singularity which is initiated by phase transitions of the first order for the surface section at J(T,S) = constant:

nucleation at total pressure of  0.30 MPa.