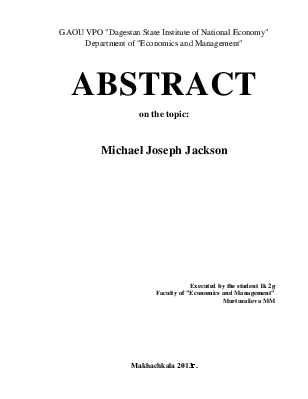 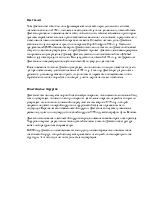 Department of "Economics and Management"

Executed by the student 1k 2g

Faculty of "Economics and Management"

Michael Joseph Jackson was born August 29, 1958 , in Gary, Indiana ) - American singer, songwriter , producer, actor and philanthropist. He started his career as a singer of " Motown " law "Jackson 5 " in 1960 , and made ​​his first solo recordings in 1971 as part of the Jackson 5 franchise. Jackson became a full-fledged solo career in 1979 and formally parted with his brothers and sisters in 1987, and has since become the most successful female singer in the style of black music , history, and one of the most commercially successful solo artists in music history .

His 1982 album " Thriller " currently holds the title of being the best-selling album in history, it was said that 60 million copies have been sold worldwide. In addition to his albums Jackson also recorded a number thirteen - one hits , including "Don't Stop 'Til You Get Enough", " Rock with you ", "Billie Jean", "Beat It". In addition to his number thirteen singles , he is also credited with four number one singles with his brothers in the Jackson 5 group , giving him only seventeen number one Billboard Hot 100 singles chart. His distinctive dance moves , music videos , and pop - inspired handling and influenced many contemporary singers such as Janet Jackson , Usher, Beyonce and Justin Timberlake .

Jackson was born the seventh of nine children in Gary, Indiana , Joseph and Katherine Jackson . The whole family , including older siblings , Rebbie and Jackie , Tito, Jermaine , Marlon and La Toya , and younger siblings Randy and Janet - lived together in a small house with two bedrooms, and Jackson , the father earned a meager living by working in the steel plant. At the behest of his mother , but against the wishes of Joseph , Jackson children to grow up as Jehovah's Witnesses and practiced door -to-door " evangelism .

In accordance with the strict rules of Joseph Jackson , the children were locked in their house , while he was working the night shift. Nevertheless , children regularly sneak out of the house to its neighbors , where they engaged in singing and music . Jackson's older brothers sometimes played Joseph prized guitar without his permission when he was at work. In the end, Joseph learned about their musical abilities and decided to use , for Gary to leave California.

His album " Thriller " , released in 1982, produced seven of the top ten hit singles , broke all sales records and became the biggest selling album in music history. "Billie Jean" music video released to promote Thriller, became the first black artist video to be shown on MTV. Seven minutes of " Thriller " music video / short film became the best selling in the world of home video at a time (packed with featurette Making Michael Jackson's " Thriller " ) , and is considered by many music industry critics one of the greatest music videos of all time and a big step forward in the artistic quality for music videos . Album third major single , "Beat It", was another # 1 pop hit in the U.S. , accompanied by the popular "West - Side Story " inspired music video. Videos for the songs "Billie Jean", " Thriller " and "Beat" is often the place on MTV and VH1 's video noble "classic" , and receive airplay on MTV2 and to this day.

Jackson became the representative of Pepsi at a height of popularity thriller . In a certain incident , his hair was accidentally set on fire January 27 , 1984 during the execution of "Billie Jean" during commercials " Pepsi " shoot in Los Angeles . He received treatment at the hospital the second degree burns on his scalp after his hair caught fire because of an error involving shooting special effects. (Fireworks erupted over Jackson, his soul sparks. ) .