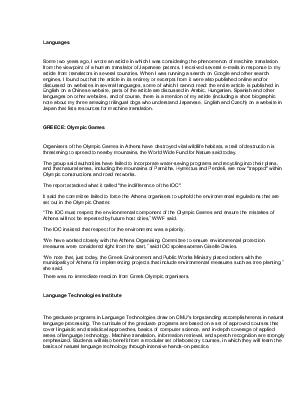 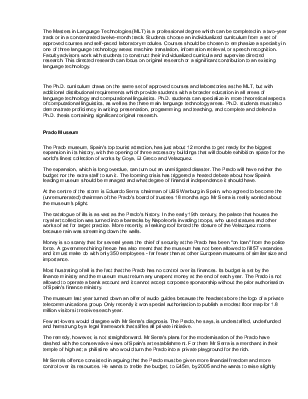 Some two years ago, I wrote an article in which I was considering the phenomenon of machine translation from the viewpoint of a human translator of Japanese patents. I received several e-mails in response to my article from translators in several countries. When I was running a search on Google and other search engines, I found out that the article in its entirety or excerpts from it were also published online and/or discussed on websites in several languages, some of which I cannot read: the entire article is published in English on a Chinese website, parts of the article are discussed in Arabic, Hungarian, Spanish and other languages on other websites, and of course, there is a mention of my article (including a short biographic note about my three amazing trilingual dogs who understand Japanese, English and Czech) on a website in Japan that lists resources for machine translation.

Organisers of the Olympic Games in Athens have destroyed vital wildlife habitats, a trail of destruction is threatening to spread to nearby mountains, the World Wide Fund for Nature said today.

The group said authorities have failed to incorporate water-saving programs and recycling into their plans, and that natural areas, including the mountains of Parnitha, Hymettus and Pendeli, are now "trapped" within Olympic constructions and road networks.

The report attacked what it called "the indifference of the IOC".

It said the committee failed to force the Athens organisers to uphold the environmental regulations that are set out in the Olympic Charter.

“The IOC must respect the environmental component of the Olympic Games and ensure the mistakes of Athens will not be repeated by future host cities,” WWF said.

The IOC insisted that respect for the environment was a priority.

“We have worked closely with the Athens Organising Committee to ensure environmental protection measures were considered right from the start,” said IOC spokeswoman Giselle Davies.

“We note that, just today, the Greek Environment and Public Works Ministry placed orders with the municipality of Athens for implementing projects that include environmental measures such as tree planting,” she said.

There was no immediate reaction from Greek Olympic organisers.

The graduate programs in Language Technologies draw on CMU's longstanding accomplishments in natural language processing. The curricula of the graduate programs are based on a set of approved courses that cover linguistic and statistical approaches, basics of computer science, and in-depth coverage of applied areas of language technology. Machine translation, information retrieval, and speech recognition are strongly emphasized. Students will also benefit from a modular set of laboratory courses, in which they will learn the basics of natural language technology through intensive hands-on practice.

The Masters in Language Technologies (MLT) is a professional degree which can be completed in a two-year track or in a concentrated twelve-month track. Students choose an individualized curriculum from a set of approved courses and self-paced laboratory modules. Courses should be chosen to emphasize a specialty in one of three language technology areas: machine translation, information retrieval, or speech recognition. Faculty advisors work with students to construct their individualized curricula and supervise directed research. This directed research can focus on original research or a significant contribution to an existing language technology.

The Ph.D. curriculum draws on the same set of approved courses and laboratories as the MLT, but with additional distributional requirements which provide students with a broader education in all areas of language technology and computational linguistics. Ph.D. students can specialize in more theoretical aspects of computational linguistics, as well as the three main language technology areas. Ph.D. students must also demonstrate proficiency in writing, presentation, programming, and teaching, and complete and defend a Ph.D. thesis containing significant original research.

The Prado museum, Spain's top tourist attraction, has just about 12 months to get ready for the biggest expansion in its history, with the opening of three accessory buildings that will double exhibition space for the world's finest collection of works by Goya, El Greco and Velazquez.

The expansion, which is long overdue, can turn out an unmitigated disaster. The Prado will have neither the budget nor the extra staff to run it. The looming crisis has triggered a heated debate about how Spain's leading museum should be managed and what degree of financial independence it should have.

At the centre of the storm is Eduardo Serra, chairman of UBS Warburg in Spain, who agreed to become the (unremunerated) chairman of the Prado's board of trustees 18 months ago. Mr Serra is really worried about the museum's plight.

The catalogue of ills is as vast as the Prado's history. In the early 19th century, the palace that houses the royal art collection was turned into a barracks by Napoleon's invading troops, who used statues and other works of art for target practice. More recently, a leaking roof forced the closure of the Velazquez rooms because rain was streaming down the walls.

Money is so scanty that for several years the chief of security at the Prado has been "on loan" from the police force. A government hiring freeze has also meant that the museum has not been allowed to fill 57 vacancies and it must make do with only 350 employees - far fewer than at other European museums of similar size and importance.