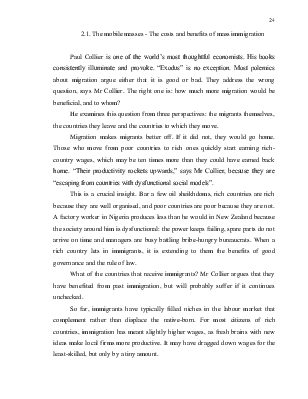 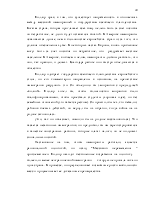 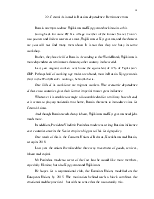 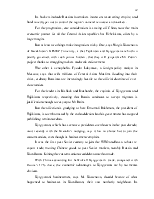 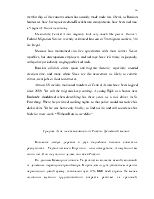 2.1. The mobile masses - The costs and benefits of mass immigration

Paul Collier is one of the world’s most thoughtful economists. His books consistently illuminate and provoke. “Exodus” is no exception. Most polemics about migration argue either that it is good or bad. They address the wrong question, says Mr Collier. The right one is: how much more migration would be beneficial, and to whom?

Migration makes migrants better off. If it did not, they would go home. Those who move from poor countries to rich ones quickly start earning rich-country wages, which may be ten times more than they could have earned back home. “Their productivity rockets upwards,” says Mr Collier, because they are “escaping from countries with dysfunctional social models”.

This is a crucial insight. Bar a few oil sheikhdoms, rich countries are rich because they are well organised, and poor countries are poor because they are not. A factory worker in Nigeria produces less than he would in New Zealand because the society around him is dysfunctional: the power keeps failing, spare parts do not arrive on time and managers are busy battling bribe-hungry bureaucrats. When a rich country lets in immigrants, it is extending to them the benefits of good governance and the rule of law.

What of the countries that receive immigrants? Mr Collier argues that they have benefited from past immigration, but will probably suffer if it continues unchecked.

So far, immigrants have typically filled niches in the labour market that complement rather than displace the native-born. For most citizens of rich countries, immigration has meant slightly higher wages, as fresh brains with new ideas make local firms more productive. It may have dragged down wages for the least-skilled, but only by a tiny amount.

However, says Mr Collier, continued mass immigration threatens the cultural cohesion of rich countries. Some diversity adds spice: think of Thai restaurants or Congolese music. But a large unabsorbed diaspora may cling to the cultural norms that made its country of origin dysfunctional, and spread them to the host country. Furthermore, when a society becomes too heterogeneous, its people may be unwilling to pay for a generous welfare state, he

says. Support for redistribution dwindles if taxpayers think the beneficiaries will be people unlike themselves.

Finally, Mr Collier looks at the effect of emigration on poor countries. Up to a point, it makes them better off. Emigrants send good ideas and hard currency home. The prospect of emigration prompts locals to study hard and learn useful skills; many then stay behind and enrich the domestic talent pool instead. But if too many educated people leave, poor countries are worse off. Big emerging markets such as China, India and Brazil benefit from

emigration, but the smallest and poorest nations do not: Haiti, for example, has lost 85% of its educated people.

Mr Collier’s most arresting argument is that past waves of migration have created the conditions under which migration will henceforth accelerate. Emigration is less daunting if you can move to a neighbourhood where lots of your compatriots have already settled. There, you can speak your native language, eat familiar food and ask your cousins to help you find