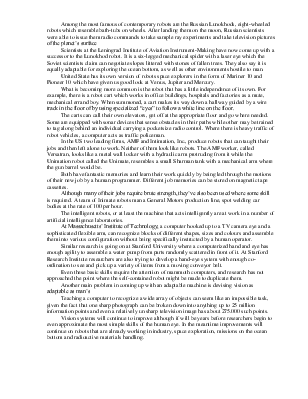 Among the most famous of contemporary robots are the Russian Lunokhods, eight-wheeled robots which resemble bath-tubs on wheels. After landing them on the moon, Russian scientists were able to issue them radio commands to take sample ray experiments and take television pictures of the planet’s surface

Scientists at the Leningrad Institute of Aviation Instrument-Making have now come up with a successor to the Lunokhod robot. It is a six-legged mechanical spider with a laser eye which the Soviet scientists claim can negotiate slopes littered with stones of fallen trees. They also say it is equally adaptable for exploring the ocean bottom, as well as other environments hostile to man.

United State has its own version of robots space explorers in the form of Mariner 10 and Pioneer 10 which have given us good look at Venus, Jupiter and Mercury.

What is becoming more common is the robot that has a little independence of its own. For example, there is a robot cart which works in office buildings, hospitals and factories as a mute, mechanical errand boy. When summoned, a cart makes its way down a hallway guided by a wire track in the floor of by using specialized “eyes” to follow a white line on the floor.

The carts can call their own elevators, get off at the appropriate floor and go where needed. Some are equipped with sonar devices that sense obstacles in their paths while other may be trained to tag along behind an individual carrying a pocketsize radio control. Where there is heavy traffic of robot vehicles, a computer acts as traffic policeman.

In the US two leading firms, AMF and Intimation, Inc., produce robots that can taught their jobs and then left alone to work. Neither of them look like robots. The AMF worker, called Versatran, looks like a metal wall locker with a hydraulic arm protruding from it while the Unimation robot called the Unimate, resembles a small Sharman tank with a mechanical arm where the gun barrel would be.

Both have fantastic memories and learn their work quickly by being led through the motions of their new job by a human programmer. Different job memories can be stored on magnetic tape cassettes.

Although many of their jobs require brute strength, they’ve also been used where some skill is required. A team of Inimate robots man a General Motors production line, spot welding car bodies at the rate of 100 per hour.

The intelligent robots, or at least the machine that acts intelligently are at work in a number of artificial intelligence laboratories.

At Massachusetts’ Institute of Technology, a computer hooked up to a TV camera eye and a sophisticated flexible arm, can recognize blocks of different shapes, sizes and colours and assemble them into various configuration without being specifically instructed by a human operator.

Similar research is going on at Stanford University where a computerized hand and eye has enough agility to assemble a water pump from parts randomly scattered in front of it. At Stanford Research Institute researchers are also trying to develop a hand-eye system with enough co-ordination to see and pick up a variety of items from a moving conveyor belt.

Even these basic skills require the attention of mammoth computers, and research has not approached the point where the self-contained robot might be made to duplicate them.

Teaching a computer to recognize a wide array of objects can seem like an impossible task, given the fact that one sharp photograph can be broken down into anything up to 25 million information points and even a relatively un sharp television image has about 275.000 such points.

Vision systems will continue to improve although if will be years before researchers begin to even approximate the most simple skills of the human eye. In the meantime improvements will continue on robots that are already working in industry, space exploration, missions on the ocean bottom and radioactive materials handling.