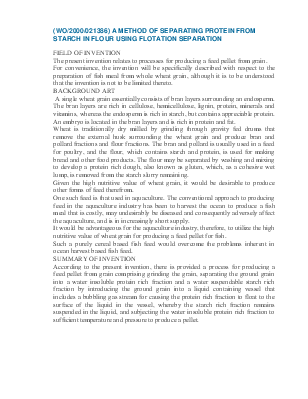 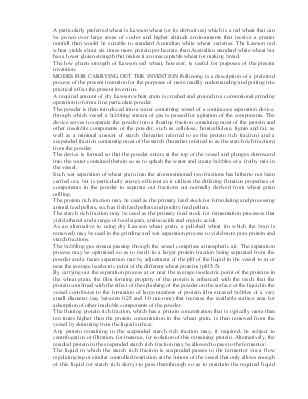 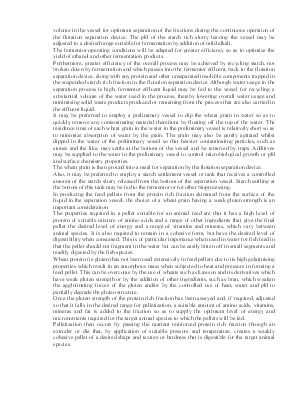 The present invention relates to processes for producing a feed pellet from grain.

For convenience, the invention will be specifically described with respect to the preparation of fish meal from whole wheat grain, although it is to be understood that the invention is not to be limited thereto.

A single wheat grain essentially consists of bran layers surrounding an endosperm. The bran layers are rich in cellulose, hemicellulose, lignin, protein, minerals and vitamins, whereas the endosperm is rich in starch, but contains appreciable protein. An embryo is located in the bran layers and is rich in protein and fat.

Wheat is traditionally dry milled by grinding through gravity fed drums that remove the external husk surrounding the wheat grain and produce bran and pollard fractions and flour fractions. The bran and pollard is usually used in a feed for poultry, and the flour, which contains starch and protein, is used for making bread and other food products. The flour may be separated by washing and mixing to develop a protein rich dough, also known as gluten, which, as a cohesive wet lump, is removed from the starch slurry remaining.

Given the high nutritive value of wheat grain, it would be desirable to produce other forms of feed therefrom.

One such feed is that used in aquaculture. The conventional approach to producing feed in the aquaculture industry has been to harvest the ocean to produce a fish meal that is costly, may undesirably be diseased and consequently adversely affect the aquaculture, and is in increasingly short supply.

It would be advantageous for the aquaculture industry, therefore, to utilize the high nutritive value of wheat grain for producing a feed pellet for fish.

A particularly preferred wheat is Lawson wheat (or its derivatives) which is a red wheat that can be grown over large areas of cooler and higher altitude environments that receive a greater rainfall than would be suitable to standard Australian white wheat varieties. The Lawson red wheat yields about six times more protein per hectare than Australian standard white wheat but has a lower gluten strength that makes it an unacceptable wheat for making bread.

The low gluten strength of Lawson red wheat, however, is useful for purposes of the present invention.

A required amount of dry Lawson wheat grain is crushed and ground in a conventional grinding operation to form a fine particulate powder.

The powder is then introduced into a water containing vessel of a continuous separation device, through which vessel a bubbling stream of gas is passed for agitation of the components. The device serves to separate the powder into a floating fraction containing most of the protein and other insoluble components of the powder, such as cellulose, hemicellulose, lignin and fat, as well as a minimal amount of starch (hereafter referred to as the protein rich fraction) and a suspended fraction containing most of the starch (hereafter referred to as the starch rich fraction) from the powder.

The device is formed so that the powder enters at the top of the vessel and plunges downward into the water contained therein so as to splash the water and create bubbles or a frothy mix in the vessel.

Such wet separation of wheat grain into the aforementioned two fractions has hitherto not been carried out, but is particularly energy efficient as it utilizes the differing flotation properties of components in the powder to separate out fractions not normally derived from wheat grain milling.

The protein rich fraction may be used as the primary feed stock for formulating and processing animal feed pellets, such as fish feed pellets and poultry feed pellets.

The starch rich fraction may be used as the primary feed stock for fermentation processes that yield ethanol and a range of food sugars, amino acids and organic acids.

As an alternative to using dry Lawson wheat grain, a polished wheat (in which the bran is removed) may be used in the grinding and wet separation process to yield more pure protein and starch fractions.

The bubbling gas stream passing through the vessel comprises atmospheric air. The separation process may be optimised so as to result in a larger protein fraction being separated from the powder and a faster separation rate by adjustment of the pH of the liquid in the vessel to at or near the average isoelectric point of the different wheat proteins (pH 5.5).