Ways of representation of the algorithm the controlling automaton follows 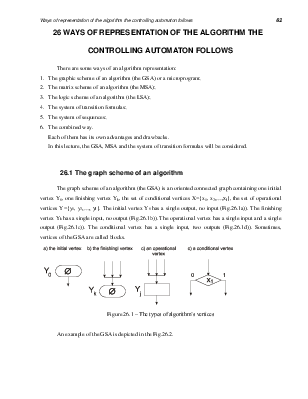 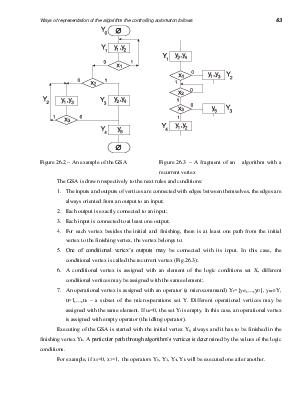 26 WAYS OF REPRESENTATION OF THE ALGORITHM THE CONTROLLING AUTOMATON FOLLOWS

There are some ways of an algorithm representation:

1.  The graphic scheme of an algorithm (the GSA) or a microprogram;

2.  The matrix scheme of an algorithm (the MSA);

3.  The logic scheme of an algorithm (the LSA);

4.  The system of transition formulas;

5.  The system of sequences;

Each of them has its own advantages and drawbacks.

In this lecture, the GSA, MSA and the system of transition formulas will be considered.

26.1 The graph scheme of an algorithm

Figure 26.1 – The types of algorithm’s vertices

An example of the GSA is depicted in the Fig.26.2.

The GSA is drawn respectively to the next rules and conditions:

1.  The inputs and outputs of vertices are connected with edges between themselves, the edges are always oriented from an output to an input;

2.  Each output is exactly connected to an input;

3.  Each input is connected to at least one output;

4.  For each vertex besides the initial and finishing, there is at least one path from the initial vertex to the finishing vertex, the vertex belongs to;