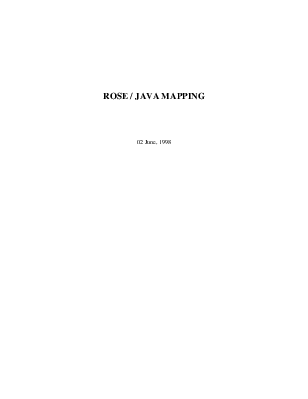 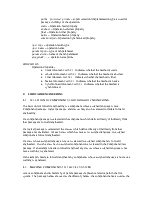 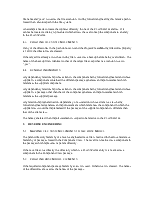 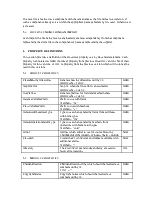 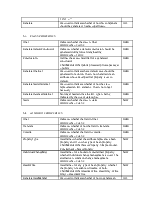 This document describes the proposed mapping for Rose/Java.

The document has five major sections.  The first defines terms which are used in subsequent sections.  The second describes the mapping of Java constructs to Rose modeling elements.  The third and fourth describe functionality particular to forward and reverse engineering, respectively.  The last defines the Rose/Java property sets.

This section is organized by Java construct.  For each construct the following items are provided, as appropriate:

·  How the construct maps to a Rose element(s).

·  A semantic definition of the construct.  Within this definition, normal font is used for literal text and italics are used for text which corresponds to something in the Rose model.

·  A definition of how the italicized items map to Rose model elements.

Maps to the Project.ClassPath property which is a semicolon-delimited list of fully qualified directory names.  This is appended to the CLASSPATH environment variable to create an extended CLASSPATH used during both forward and reverse engineering to resolve the physical location of Java files.

Note:  If there is no entry in the extended CLASSPATH which ends with "lib\classes.zip" an attempt is made to locate the JDK library in the following way:

·  An attempt is made to locate the file bin\javac.exe in one of the entries of the PATH environment variable

·  If such a file is located, as <installdir>\bin\javac.exe for example, an attempt is made to locate the file <installdir>\lib\classes.zip.

·  If found, it is added to the extended CLASSPATH

package, component – see the Generating imports section for a description of how these are generated

Maps to a Rose class.

super1  = name of superclass, if any, which represents an extended class

super2, … = name of superclass(es), if any, which represent implemented interfaces

·  Final (Boolean FALSE) – Indicates whether the class is final

·  Static (Boolean FALSE) – Indicates whether the class is static

Note:  For a definition of the fields and methods contained in a class see the FIELD and METHOD sections.

Maps to a Rose class whose stereotype is <Interface>.

super1, … = name of superclass(es), if any, which represent extended interfaces

Note:  For a definition of the fields and methods contained in a class see the FIELD and METHOD sections.

Maps to a Rose class whose stereotype is <Delegate> or <Multicast> and which contains an operation called Invoke.

The keyword 'delegate' always appears in this definition.  If the stereotype of the class is <Multicast> then the keyword 'multicast' also appears.  All of the remaining elements of the definition are generated based on the Invoke operation included in the class.  Their semantics are exactly the same as those described for a method in the METHOD section.

Java fields map to attributes or roles in the Rose model.