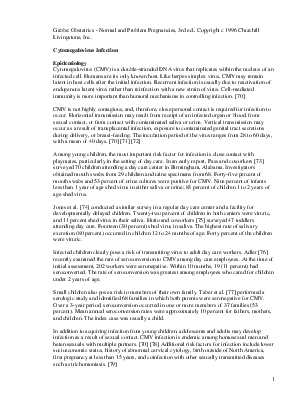 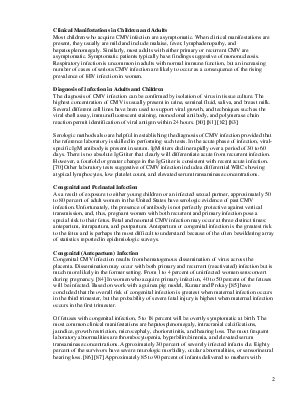 excretion (80 percent) occurred in children 12 to 24 months of age. Forty percent of the children were viruric.

Small children also pose a risk to members of their own family. Taber et al. [77] performed a serologic study and identified 68 families in which both parents were seronegative for CMV. Over a 3-year period, seroconversion occurred in one or more members of 37 families (53 percent). Mean annual seroconversion rates were approximately 10 percent for fathers, mothers, and children. The index case was usually a child.

In addition to acquiring infection from young children, adolescents and adults may develop infection as a result of sexual contact. CMV infection is endemic among homosexual men and heterosexuals with multiple partners. [70] [78] Additional risk factors for infection include lower socioeconomic status, history of abnormal cervical cytology, birth outside of North America, first pregnancy at less than 15 years, and coinfection with other sexually transmitted diseases such as trichomoniasis. [79]

Clinical Manifestations in Children and Adults

Most children who acquire CMV infection are asymptomatic. When clinical manifestations are present, they usually are mild and include malaise, fever, lymphadenopathy, and hepatosplenomegaly. Similarly, most adults with either primary or recurrent CMV are asymptomatic. Symptomatic patients typically have findings suggestive of mononucleosis. Respiratory infection is uncommon in adults with normal immune function, but an increasing number of cases of serious CMV infection are likely to occur as a consequence of the rising prevalence of HIV infection in women.

Diagnosis of Infection in Adults and Children

The diagnosis of CMV infection can be confirmed by isolation of virus in tissue culture. The highest concentration of CMV is usually present in urine, seminal fluid, saliva, and breast milk. Several different cell lines have been used to support viral growth, and techniques such as the viral shell assay, immunofluorescent staining, monoclonal antibody, and polymerase chain reaction permit identification of viral antigen within 24 hours. [80] [81] [82] [83]

Serologic methods also are helpful in establishing the diagnosis of CMV infection provided that the reference laboratory is skilled in performing such tests. In the acute phase of infection, viral-specific IgM antibody is present in serum. IgM titers decline rapidly over a period of 30 to 60 days. There is no absolute IgG titer that clearly will differentiate acute from recurrent infection. However, a fourfold or greater change in the IgG titer is consistent with recent acute infection. [70] Other laboratory tests suggestive of CMV infection include a differential WBC showing atypical lymphocytes, low platelet count, and elevated serum transaminase concentrations.

As a result of exposure to either young children or an infected sexual partner, approximately 50 to 80 percent of adult women in the United States have serologic