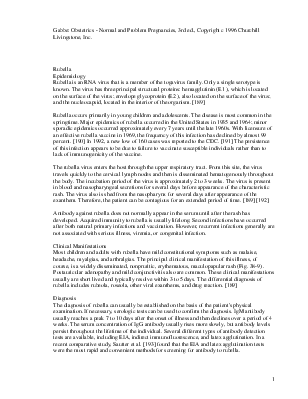 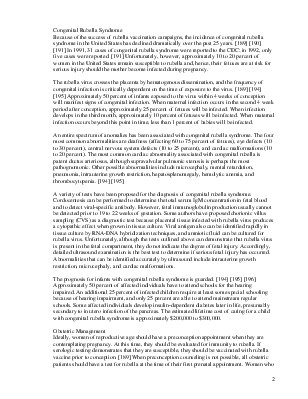 Rubella occurs primarily in young children and adolescents. The disease is most common in the springtime. Major epidemics of rubella occurred in the United States in 1935 and 1964; minor sporadic epidemics occurred approximately every 7 years until the late 1960s. With licensure of an effective rubella vaccine in 1969, the frequency of this infection has declined by almost 99 percent. [190] In 1992, a new low of 160 cases was reported to the CDC. [191] The persistence of this infection appears to be due to failure to vaccinate susceptible individuals rather than to lack of immunogenicity of the vaccine.

The rubella virus enters the host through the upper respiratory tract. From this site, the virus travels quickly to the cervical lymph nodes and then is disseminated hematogenously throughout the body. The incubation period of the virus is approximately 2 to 3 weeks. The virus is present in blood and nasopharyngeal secretions for several days before appearance of the characteristic rash. The virus also is shed from the nasopharynx for several days after appearance of the exanthem. Therefore, the patient can be contagious for an extended period of time. [189] [192]

Antibody against rubella does not normally appear in the serum until after the rash has developed. Acquired immunity to rubella is usually lifelong. Second infections have occurred after both natural primary infections and vaccination. However, recurrent infections generally are not associated with serious illness, viremia, or congenital infection.

Most children and adults with rubella have mild constitutional symptoms such as malaise, headache, myalgias, and arthralgias. The principal clinical manifestation of this illness, of course, is a widely disseminated, nonpruritic, erythematous, maculopapular rash (Fig. 38-9) . Postauricular adenopathy and mild conjunctivitis also are common. These clinical manifestations usually are short lived and typically resolve within 3 to 5 days. The differential diagnosis of rubella includes rubeola, roseola, other viral exanthems, and drug reaction. [189]

The diagnosis of rubella can usually be established on the basis of the patient's physical examination. If necessary, serologic tests can be used to confirm the diagnosis. IgM antibody usually reaches a peak 7 to 10 days after the onset of illness and then declines over a period of 4 weeks. The serum concentration of IgG antibody usually rises more slowly, but antibody levels persist throughout the lifetime of the individual. Several different types of antibody detection tests are available, including EIA, indirect immunofluorescence, and latex agglutination. In a recent comparative study, Sautter et al. [193] found that the EIA and latex agglutination tests were the most rapid and convenient methods for screening for antibody to rubella.

Because of the success of rubella vaccination campaigns, the incidence of congenital rubella syndrome in the United States has declined dramatically over the past 25 years. [189] [190] [191] In 1991, 31 cases of congenital rubella syndrome were reported to the CDC; in 1992, only five cases were reported. [191] Unfortunately, however, approximately 10 to 20 percent of women in the United States remain susceptible to rubella and, hence, their fetuses are at risk for serious injury should the mother become infected during pregnancy.

An entire spectrum of anomalies has been associated with congenital rubella syndrome. The four most common abnormalities are deafness (affecting 60 to 75 percent of fetuses), eye defects (10 to 30 percent), central nervous system defects (10 to 25 percent), and cardiac malformations (10 to 20 percent). The most common cardiac abnormality associated with congenital rubella is patent ductus arteriosus, although supravalvular pulmonic stenosis is perhaps the most pathognomonic. Other possible abnormalities include microcephaly, mental retardation, pneumonia, intrauterine growth restriction, hepatosplenomegaly, hemolytic anemia, and thrombocytopenia. [194] [195]