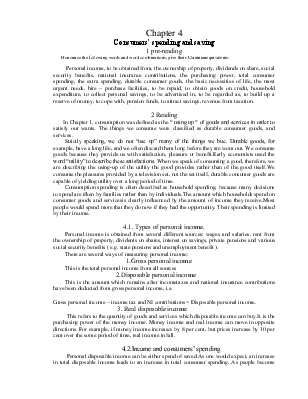 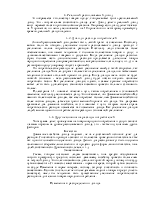 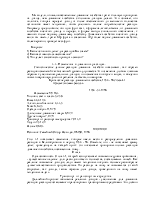 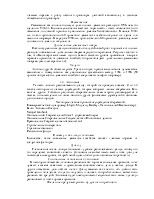 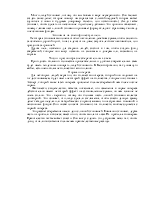 Pronounce the following words and word combinations, give their Ukrainianequivalents:

Personal income, to be obtained from, the ownership of property, dividends on share, social security benefits, national insurance contributions, the purchasing power, total consumer spending, the extra spending, durable consumer goods, the basic necessities of life, the most urgent needs, hire – purchase facilities, to be repaid, to obtein goods on credit, household expenditure, to collect personal savings, to be advertised in, to be regarded as, to build up a reserve of money, to cope with, pension funds, to attract savings, revenue from taxation.

In Chapter 1, consumption was defined as the “ using up “ of goods and services in order to satisfy our wants. The things we consume were classified as durable consumer goods, and services.

Strictly speaking, we do not “use up” many of the things we bue. Durable goods, for example, have a long life, and we often discard them long before they are wom out. We consume goods because they provide us with satisfaction, pleasure or benefit.Early economists used the word “utility” to describe these satisfactions. When we speak of consuming a good, therefore, we are describing the using-up of the utility the good provides rather than of the good itself.We consume the pleasures provided by a television set, not the set itself, durable consumer goods are capable of yielding utility over a long period of time.

Consumption spending is often described as household spending, because many decisions to spend are tfken by families rather than by individuals.The amount which households spend on consumer goods and servicesis clearly influenced by the amount of income they receive.Most people would spend more that they do now if they had the opportunity. Their spending is limited by their income.

There are several ways of measuring personal income:

This is the total personal income from all sources

This is the amount which remains after incometaxes and national insurance contributions have been deducted from gross personal income, i.e.

This refers to the quantity of goods and services which disposable income can buy.It is the purchasing power of the money income. Money income and real income can move in opposite directions. For example, if money income increascs by 8 per cent, but prices increase by 10 per cent over the some period of time, real income in fall.

Personal disposable income can be either spend of saved.As one would expect, an increase in total disposable income leads to an increase in total consumer spending. As people become better off, they tend to by more goods and services, and better-quality goods and services. When incomes increase in developed countries, much of the extra spending goes on durable consumer goods ( e.g. cars, microwave cookers,videos, etc. ) and on a variety of services ( e.g. holidays abroad ).

But consumer spending does not usualy increase as fast as income increases.Although people spend more as their income increases, they also tend to save a larger persentage of their income. When incomes are very low there will be no saving – the whole of disposable income will be required to buy the basic necessities of life. As incomes increase, however, and the most urgent needs can easily be satisfied, it becomes possible to spend more and save more.

Figure 4.1. helps to explain the way in which consumption and saving change as income increases. It shows that Household B, with the much higher income, still consumes more than Household A with the lower income, even thoughit spends a smaller persentage of its income. This diagram compares two households, but it helps to the way in which total consumer spending country changes as income changes.As people’s incomes increase, we find that both consumer spending and saving increase.

4.3. Other influences on consumers’ spending

Although the amount of money spent on consumer goods and services depends mainly on the level of disposable income, it is also influenced by other factors.