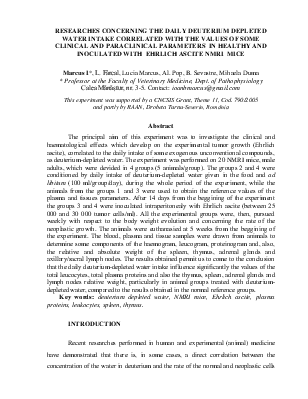 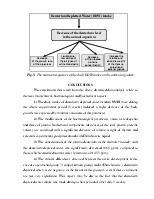 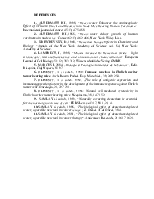 * Professor at the Faculty of Veterinary Medicine, Dept. of Pathophysiology

The principal aim of this experiment was to investigate the clinical and haematological effects which develop on the experimental tumor growth (Ehrlich ascite), correlated to the daily intake of some exogenous unconventional compounds, as deuterium-depleted water. The experiment was performed on 20 NMRI mice, male adults, which were devided in 4 groups (5 animals/group). The groups 2 and 4 were conditioned by daily intake of deuterium-depleted water given in the food and ad libitum (100 ml/group/day), during the whole period of the experiment, while the animals from the groups 1 and 3 were used to obtain the reference values of the plasma and tissues parameters. After 14 days from the beggining of the experiment the groups 3 and 4 were inoculated intraperitonealy with Ehrlich ascite (between 25 000 and 30 000 tumor cells/ml). All the experimental groups were, then, pursued weekly with respect to the body weight evolution and concerning the rate of the neoplastic growth. The animals were euthanasied at 5 weeks from the beggining of the experiment. The blood, plasma and tissue samples were drawn from animals to determine some components of the haemogram, leucogram, proteinogram and, also, the relative and absolute weight of the spleen, thymus, adrenal glands and axillary/sacral lymph nodes. The results obtained permit us to come to the conclusion that the daily deuterium-depleted water intake influence significantly the values of the total leucocytes, total plasma proteins and also the thymus, spleen, adrenal glands and lymph nodes relative weight, particularly in animal groups treated with deuterium-depleted water, compared to the results obtained in the normal reference groups.

Recent researches performed in human and experimental (animal) medicine have demonstrated that there is, in some cases, a direct correlation between the concentration of the water in deuterium and the rate of the normal and neoplastic cells proliferation [1,3,11,12]. Thus, if in the case of normal or usual water the deuterium level is situated, constantly, between 140-150 ppm, in this particular type of water, known as deuterium-depleted water (DDW), the level of this isotope of the hydrogen (H) is situated much under 145 ppm, respectively between 33-35 ppm. Moreover, both in human and in veterinary clinical practice the deuterium-depleted water is a component of some pharmaceutics and nutritional products, used particularly in the treatment of some types of cancers in dogs, cats and humans. It was, thus, experimentaly demonstrated that the daily ad libitum intake of the deuterium-depleted water induced a significant decrease of some types of neoplastic cells proliferation in laboratory animals grafted with some types of transplantable tumors [2,4,8,11].

The experiment was performed on 20 NMRI mice, male adults, which were devided in four groups (n=5). The groups 2 and 4were treated daily with the intake of deuterium-depleted water given ad libitum (100 ml/group/day), during the whole period of the experiment. The groups 1 and 3 were used to obtain the reference values of the blood, plasma and tissues measured constituients. After 2 weeks from the beggining of the experiment the groups 3 and 4 were inoculated intraperitonealy with Ehrlich ascite (25 000 and 30 000 tumour cells/ml).All the experimental groups were, then, pursued weekly with respect to some clinical aspects, as the body weight and regarding to the rate of the Ehrlich ascite development. The animals were euthanasied (under narcose) after 5 weeks from the beginning of the experiment. Some blood, plasma and tissues samples were gathered to determine the value of the white blood cells, plasma proteins and the absolute and relative weight of the spleen, thymus and adrenal glands.

Regarding the clinical investigations results, we observed during the whole period of the experiment, a constant and slight increase of the body weight of animals from the reference groups 1 and 2 (fig. 1), and a significative increase of body weight values in the Ehrlich ascite inoculated groups, caused the most probably by the progressive tumour development. Practicaly, it can be said that deuterium-depleted water intake doesn’t influence significantly the body-weight evolution in the reference group animals, so that the increased growth rate in tumour groups is due exclusively to the Erlich-ascite intraperitoneal development.

Regarding the leukogram results, there were obtained normal values of the total leukocytes in the case of reference group at the end of the experiment [5], but low and very low numbers of the total white blood cells in the groups 3 and 4, inoculated ip with Ehrlich ascite (fig. 2), effect due, the most probably, to the immunosupressive action of the Ehrlich ascite liquid [6,7,8].

Regarding the percentage distribution of the leukocyte populations, our data demonstrates that, all types of white blood cells were decreased in the case of the animals inoculated with Ehrlich ascite (groups 3 and 4), compared to the values obtained in the animals from the reference groups 1 and 2. The most significant variations affect the small and large lymphocytes, the values of which are the smallest compared to those obtained in the reference groups 1 and 2 (fig. 3).