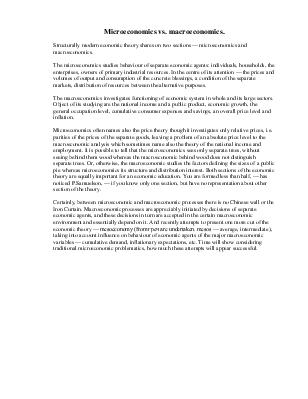 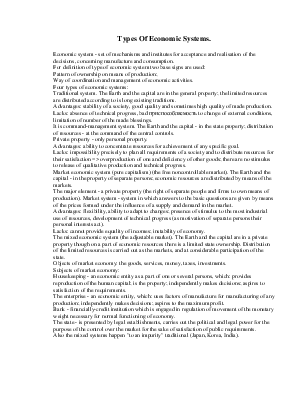 The microeconomics studies behaviour of separate economic agents: individuals, households, the enterprises, owners of primary industrial resources. In the centre of its attention — the prices and volumes of output and consumption of the concrete blessings, a condition of the separate markets, distribution of resources between the alternative purposes.

The macroeconomics investigates functioning of economic system in whole and its large sectors. Object of its studying are the national income and a public product, economic growth, the general occupation level, cumulative consumer expenses and savings, an overall price level and inflation.

Microeconomics often names also the price theory though it investigates only relative prices, i.e. parities of the prices of the separate goods, leaving a problem of an absolute price level to the macroeconomic analysis which sometimes name also the theory of the national income and employment. It is possible to tell that the microeconomics sees only separate trees, without seeing behind them wood whereas the macroeconomic behind wood does not distinguish separate trees. Or, otherwise, the macroeconomic studies the factors defining the sizes of a public pie whereas microeconomics its structure and distribution interest. Both sections of the economic theory are equally important for an economic education. You are formed less than half, — has noticed P.Samuelson, — if you know only one section, but have no representation about other section of the theory.

Certainly, between microeconomic and macroeconomic processes there is no Chinese wall or the Iron Curtain. Macroeconomic processes are appreciably initiated by decisions of separate economic agents, and these decisions in turn are accepted in the certain macroeconomic environment and essentially depend on it. And recently attempts to present one more cut of the economic theory — mesoeconomy (from греч are undertaken. mesos — average, intermediate), taking into account influence on behaviour of economic agents of the major macroeconomic variables — cumulative demand, inflationary expectations, etc. Time will show considering traditional microeconomic problematics, how much these attempts will appear successful.

Economic system - set of mechanisms and institutes for acceptance and realisation of the decisions, concerning manufacture and consumption.

For definition of type of economic system two base signs are used:

Pattern of ownership on means of production;

Way of coordination and management of economic activities.

Traditional system. The Earth and the capital are in the general property; the limited resources are distributed according to is long existing traditions.

Advantages: stability of a society, good quality and sometimes high quality of made production.

Lacks: absence of technical progress, bad приспособляемость to change of external conditions, limitation of number of the made blessings.

It is command-management system. The Earth and the capital - in the state property; distribution of resources - at the command of the central controls.

Advantages: ability to concentrate resources for achievement of any specific goal.

Lacks: impossibility precisely to plan all requirements of a society and to distribute resources for their satisfaction => overproduction of one and deficiency of other goods; there are no stimulus to release of qualitative production and technical progress.

Market economic system (pure capitalism) (the free noncontrollable market). The Earth and the capital - in the property of separate persons; economic resources are distributed by means of the markets.

The major element - a private property (the right of separate people and firms to own means of production). Market system - system in which answers to the basic questions are given by means of the prices formed under the influence of a supply and demand in the market.

Advantages: flexibility, ability to adapt to changes; presence of stimulus to the most industrial use of resources, development of technical progress (as motivation of separate persons their personal interests act).

The mixed economic system (the adjustable market). The Earth and the capital are in a private property though on a part of economic resources there is a limited state ownership. Distribution of the limited resources is carried out as the markets, and at considerable participation of the state.

Housekeeping - an economic entity as a part of one or several persons, which: provides reproduction of the human capital; is the property; independently makes decisions; aspires to satisfaction of the requirements.

The enterprise - an economic entity, which: uses factors of manufacture for manufacturing of any production; independently makes decisions; aspires to the maximum profit.

Bank - financially-credit institution which is engaged in regulation of movement of the monetary weight necessary for normal functioning of economy.

The state - is presented by legal establishments, carries out the political and legal power for the purpose of the control over the market for the sake of satisfaction of public requirements.