The Economic Regions of Great Britan. Tourist is of major importance for Scotland 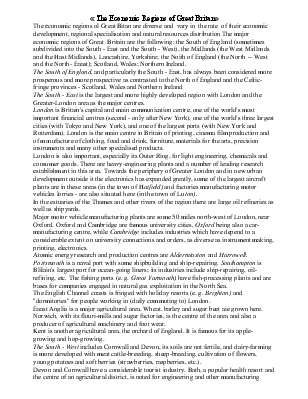 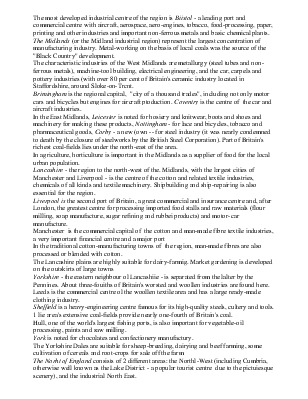 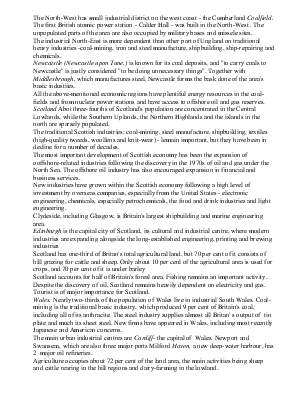 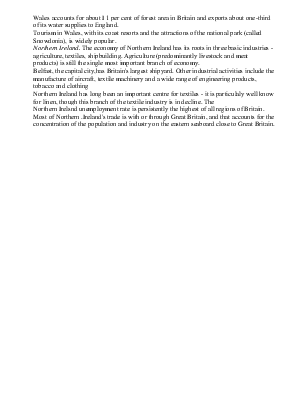 Hull, one of the world's largest fishing ports, is also important for vegetable-oil processing, paints and saw milling.

The Yorkshire Dales are suitable for sheep-breeding, dairying and beef farming, some cultivation of cereals and root-crops for sale off the farm

The Norht of England consists of 2 different areas: the Northl-West (including Cumbria, otherwise well known as the Lake District - a popular tourist centre  due to the pictuiesque scenery), and the industrial North East.

The North-West has small industrial district on the west coast - the Cumberland Coalfield.

The first British atomic power station - Calder Hall - was built in the North-West . The unpopulated parts of the area are also occupied by military bases and missele sites.

The industrial North-East is more dependent than other part of Ungland on traditional heavy industries -coal-mining, iron and steel manufacture, shipbuilding, ship-repairing and chemicals.

Newcaistle (Newcastle upon Tune.) is known for its coal deposits, and "to carry coals to Newcastle" is justly considered "to be doing unnecessary things". Together with Middlesbrough, which manufactures steel, Newcastle forms the bask done of the area's basic industiies.

All the above-mentioned economic regions have plentiful energy resources in the coal-fields and from nuclear power stations and have access to offshore oil and gas reserves.

ScotlandAbot three-fourths of Scotland's population are concentrated in the Central Lowlands, while the Southern Uplands, the Northern Highlands and the islands in the north are sparsely populated.

The traditional Scottish industries: coal-mining, steel manufacture, shipbuilding, textiles (high-quality tweeds, woollens and knit-wear) - lemain important, but they have been in decline for a number of decades.

The most important development of Scottish economy has been the expansion of ooffshore-related industries following the discovery in the 1970s of oil and gas under the North Sea. The offshore oil industry has also encouraged expansion in financial and business services.

Edinburghis the capital city of Scotland, its cultural and industrial centre, where modern industries are expanding alongside the long-established engineering, printing and brewing industries

Scotland accounts for half of Britain's foresl area. Fishing remains an important activity.

Despite the discovery of oil, Scotland remains heavily dependent on electricity and gas.

Tourist is of major importance for Scotland.

Wales. Nearly two-thirds of the population of Wales live in industrial South Wales. Coal-mining is the traditional basic industry, which produced 9 per cent of Britain's coal, including all of its anthracite. The steel industry supplies almost all Britan' s output of  tin plate and much its sheet steel. New firms have appeared in Wales, including most recently Japanese and American concerns.

The main urban industrial centres are Cardiff- the capital of  Wales. Newport and Swanseaa, which are also three major ports Milford Haven, a new deep-water harbour, has 2  major oil refineries.

Agriculture occupies about 72 per cent of the land area, the main activities being sheep and cattle rearing in the hill regions and dairy-farming in the lowland.

Wales accounts for about I 1 per cent of forest area in Britain and exports about one-third of its water supplies to England.

Tourism in Wales, with its coast resorts and the attractions