Decide on the tense and voice of the predicate. Translate the sentences in which the infinitive has different functions. Define the function 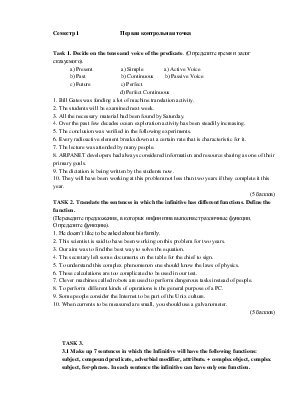 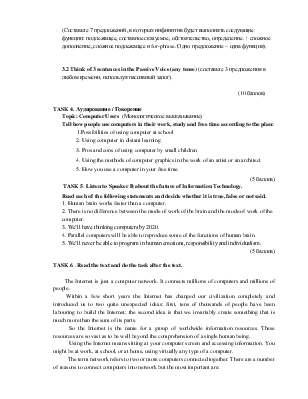 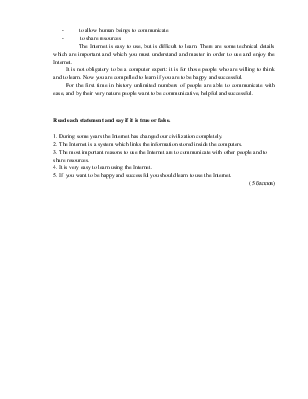 These calculations are too complicated to be used in our test.

7. Clever machines called robots are used to perform dangerous tasks instead of people.

8. To perform  different kinds of operations is the general purpose of a PC.

9. Some people consider the Internet to be part of the Unix culture.

10. When currents to be measured are small, you should use a galvanometer.

Tell how people use computers in their work, study and free time according to the plan:    1.Possibilities of using computer at school

3. Pros and cons of using computer by small children

4. Using the methods of computer graphics in the work of an artist or an architect

5. How you use a computer in your free time

TASK 5. Listen to Speaker B about the future of Information Technology.

Read each of the following statements and decide whether it is true, false or not said.

4. Parallel computers will be able to reproduce some of the functions of human brain.

5. We’ll never be able to program in human emotions, responsibility and individualism.

TASK 6 . Read the text and do the task after the text.

The Internet is just a computer network. It connects millions of computers and millions of people.

Within a few short years the Internet has changed our civilization completely and introduced us to two quite unexpected ideas: first, tens of thousands of people have been labouring to build the Internet; the second idea is that we invariably create something that is much more than the sum of its parts.

So the Internet is the name for a group of worldwide information resources. These resources are so vast as to be well beyond the comprehension of a single human being.

Using the Internet means sitting at your computer screen and accessing information. You might be at work, at school, or at home, using virtually any type of a computer.

The term network refers to two or more computers connected together. There are a number of reasons to connect computers into network but the most important are:

-  to allow human beings to communicate

The Internet is easy to use, but is difficult to learn. There are some technical details which are important and which you must understand and master in order to use and enjoy the Internet.

It is not obligatory to be a computer expert: it is for those people who are willing to think and to learn. Now you are compelled to learn if you are to be happy and successful.

For the first time in history unlimited numbers of people are able to communicate with ease, and by their very nature people want to be communicative, helpful and successful.

Read each statement and say if it is true or false.

1. During some years the Internet has changed our civilization completely.

2. The Internet is a system which links the information stored inside the computers.

3. The most important reasons to use the Internet are to communicate