Towns. Cardiff is the capital and largest city of Wales, and it is also the country’s main economic 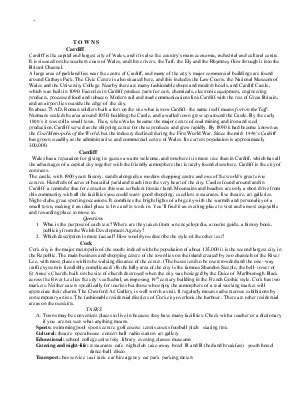 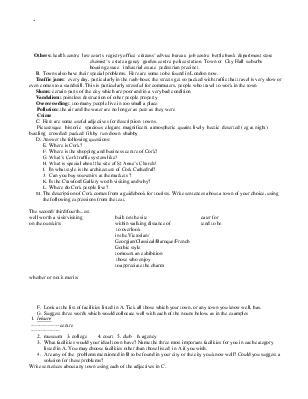 Cardiff is the capital and largest city of Wales, and it is also the country’s main economic, industrial and cultural centre. It is situated on the southern coast of Wales, and three rivers, the Taff, the Ely and the Rhymney flow through it into the Bristol Channel.

A large area of parkland lies near the centre of Cardiff, and many of the city’s major commercialbuildings are found around Cathays Park. The Civic Centre is also situated here, and this includes the Law Courts, the National Museum of Wales and the University College. Nearby there are many fashionable shops and modern hotels, and Cardiff Castle, which was built in 1090. Factories in Cardiff produce parts for cars, chemicals, electronic equipment, engineering products, processed food and tobacco. Modern rail and road communications link Cardiff with the rest of Great Britain, and an airport lies outside the edge of  the city.

In about 75 AD, Roman soldiers built a fort on the site what is now Cardiff- the name itself means fort on the Taff. Normans settled the area around 1050, building the Castle, and a walled town grew up around the Castle. By the early 1800’s it was still a small town. Then, when Wales became the major centre of coal mining and iron and steel production, Cardiff served as the shipping centre for these products and grew rapidly. By 1890 it had become known as the Coal Metropolis of the World, but the industry declined during the First World War. Since the mid- 1940’s Cardiff has grown steadily as the administrative and commercial centre of Wales. Its current population is approximately 300,000.

Wales has a reputation for giving its guests a warm welcome, and nowhere it is more true than in Cardiff, which has all the advantages of a capital city together with the friendly atmosphere that is rarely found elsewhere. Cardiff is the city of contrasts.

The castle, with 1900 years history, stands alongside a modern shopping centre and one of the world’s great civic centres. Hundreds of acres of beautiful parkland reach into the very heart of the city. Castles found around and in Cardiff- a reminder that for centuries this was turbulent frontier land. Mountains and beaches are only a short drive from this community with all the facilities you could want- good shopping, excellent restaurants, live theatre, art galleries. Night-clubs, great sporting occasions. It combines the bright lights of a big city with the warmth and personality of a small town, making it an ideal place to live and to work in. You’ll find it an exciting place to visit and a most enjoyable and rewarding place to move to.

1.   What is the purpose of each text? Where are they taken from -an encyclopedia, a tourist guide, a history book, publicity from the Welsh Development Agency?

2.   Which description is more factual? How would you describe the style of the other text?

Cork city is the major metropolis of the south; indeed with the population of about 135,000 it is the second largest city in the Republic. The main business and shopping centre of the town lies on the island created by two channels of the River Lee, with most places within the walking distance of the centre. (The buses tend to be overcrowded and the one- way traffic system is fiendishly complicated.) In the hilly area of the city is the famous Shandon Steeple, the bell- tower of  St Anne’s Church, built on the site of church destroyed when the city was besieged by the Duke of  Marlborough. Back across the River Lee lies the city’s cathedral, an imposing 19th century building in the French Gothic style. Cork has two markets. Neither caters specifically for tourists but those who enjoy the atmosphere of a real working market will appreciate their charm. The Crawford Art Gallery is well worth a visit. It regularly mounts adventurous exhibitions by contemporary artists. The fashionable residential districts of Cork city overlook the harbour.. There are other residential areas on the outskirts.

A.  Towns may be convenient places to live in because they have many