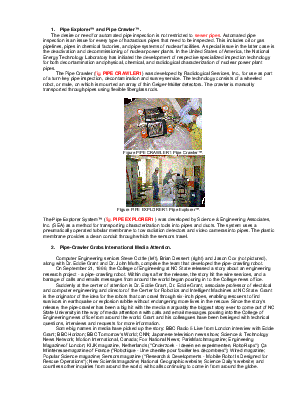 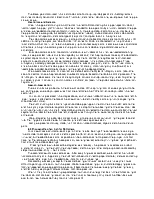 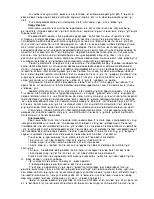 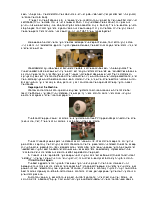 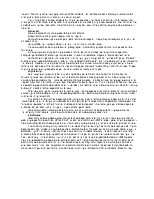 The Pipe Explorer System™ (fig. PIPE EXPLORER1 ) was developed by Science & Engineering Associates, Inc. (SEA) as a method for transporting characterization tools into pipes and ducts. The system uses a pneumatically operated tubular membrane to tow radiation detectors and video cameras into pipes. The plastic membrane provides a clean conduit through which the sensors travel.

On September 21, 1999, the College of Engineering at NC State released a story about an engineering research project - a pipe-crawling robot. Within days after the release, the story hit the wire services, and a barrage of calls and emails messages from around the world began pouring in to the College news office.

Suddenly at the center of attention is Dr. Eddie Grant, Dr. Eddie Grant, associate professor of electrical and computer engineering and director of the Center for Robotics and Intelligent Machines at NC State. Grant is the originator of the idea for the robots that can crawl through six-inch pipes, enabling rescuers to find survivors in earthquake or explosion rubble without endangering more lives in the rescue. Since the story's release, the pipe-crawler has been a big hit with the media я arguably the biggest story ever to come out of NC State University in the way of media attention я with calls and email messages pouring into the College of Engineering news office from around the world. Grant and his colleagues have been besieged with technical questions, interviews and requests for more information.

The most recent design, MOCASIn 2, is able to navigate a complicated course of piping, complete with 90-degree turns and vertical climbs. The segmented robot has the look of a cyber-inchworm and uses pneumatics to force padded "feet" against the pipe walls as it extends and contracts its body along the pipe course.

MOCASIn 2 is outfitted with a tiny video camera and lights that feed video through a cable to a monitor so its location in the pipe can be seen. The robot can also carry sensors that could "hear" or sense vibrations from someone tapping on the pipes. 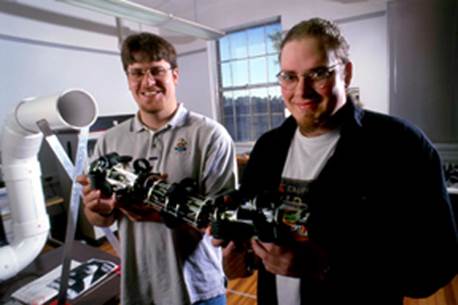 Full remote control of motor, park and expose modes from outside the pipeline.

Made from lightweight modules which can be easily transported to the pipe end and then quickly assembled. The total weight of the assembled crawler is less than similar size models.

The battery pack can be changed without removing the crawler from the pipeline.

Apart from the standard 24 AH battery pack, there are also 17 AH and 38 AH versions available.

The standard crawler has two driven wheels, but a low cost four wheel drive conversion is available which only adds approx. 2kg to the chassis weight.

Suitable for onshore and offshore conditions.

Once loaded into the open end of the pipe, the crawler is completely self contained and does not need any external connections. Depending on operating conditions the crawler can X-ray approx